September 18, 2008 By Damian in jesus tie-dyed for your sins, religion No Comments 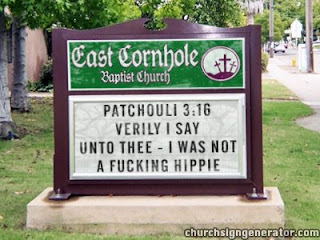 This is a few weeks old, but I’m lazy, so I’m just getting around to commenting on it.

“Mrs. Palin needs to be reminded that Jesus Christ was a community organizer and Pontius Pilate was a governor.”

I know it’s a fait accompli, but I’ve always been annoyed at the way both Republicans and Democrats try to pretend that Jesus would be voting their way if he were around today. I’m not a fan of arguments from authority in any event, especially when the authority in question is the equivalent of a Rorschach inkblot. Quelle surprise! These people don’t seem to be too impressed with all that turn-the-other-cheek stuff! And oh my stars and garters, popular conceptions of him have changed repeatedly to reflect contemporary hopes and fears!

I know, I know: the Beatitudes! Rich man, camel, eye of a needle! How can you deny that he was the ur-Marx, the original righteous dudemeister who just wanted us all to hold hands and sing? I’ve heard all that, but there’s a few others that don’t seem to get the same attention, for some strange reason:

Mark 16:16 – Whoever believes and is baptized will be saved, but whoever does not believe will be condemned.

2 Corinthians 6:14 – Do not be yoked together with unbelievers. For what do righteousness and wickedness have in common? Or what fellowship can light have with darkness?

Mark 3:29 – But whoever blasphemes against the Holy Spirit will never be forgiven; he is guilty of an eternal sin.

Matthew 12:30 – He who is not with me is against me, and he who does not gather with me scatters.

Matthew 10:33 – But whoever disowns me before men, I will disown him before my Father in heaven.

Luke 14:26 – If anyone comes to me and does not hate his father and mother, his wife and children, his brothers and sisters—yes, even his own life—he cannot be my disciple.

Dude, you’re harshing my mellow! And that’s the stuff that made the final cut; some parts that ended up on the cutting room floor make him look even worse. In the non-canonical Apocalypse of Peter, he takes Pete on a guided tour, Dante-style, of heaven and hell, where he shows him the torments awaiting sinners, such as:

Blasphemers being hung by their tongues

Rich people being tossed onto a “razor-sharp” pillar of fire

Men who were attracted to it being hung by their genitals

I’m always amused by the way people quote passages verbatim when they agree with the supposed message, but when passages like those above seem to be out of harmony with the overarching theme, we have to interpret them symbolically or figuratively until we make them mean what we want them to mean. Funny how that works.

Anyway, leaving aside all the problems with ancient texts that have been misinterpreted both accidentally and willfully over the course of two millennia, and leaving aside the fact that the Gospels were intended as propaganda, not a detached, neutral, objective, factual description of historical events so that people twenty centuries later would know exactly who said what and why, it seems clear that if – and I am saying if – Jesus actually existed, he was an apocalypticist who really, truly, literally expected the world to end any minute.

Mark 9:1 – And he said to them, “I tell you the truth, some who are standing here will not taste death before they see the kingdom of God come with power.”

Mark 13:30 – I tell you the truth, this generation will certainly not pass away until all these things have happened.

Mark 14:62 – “I am,” said Jesus. “And you will see the Son of Man sitting at the right hand of the Mighty One and coming on the clouds of heaven.”

Suddenly his exhortations to give no thought to the morrow make sense; passages like Luke 14:26 seem to portray the mentality of a typical cult leader. He wasn’t trying to create a blueprint for a peaceful, tolerant society for future generations to enjoy; he didn’t think there would be any future generations. Maybe the people who best represent his message today are the guys walking around with sandwich boards telling you to repent.

« No, Rousseau, No» Vox Lobotomized