November 24, 2008 By Damian in getting and spending, ohferfucksake, religion No Comments 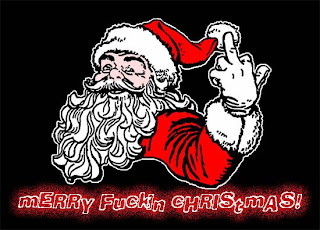 Another contestant for the “Crazy, Cynical, or Just Plain Fucking Stupid?” guessing game. As always, I don’t think the choices are mutually exclusive, but when it comes to the nonexistent War on the Winter Solstice, I do think it’s more cynical than anything else. As many gleefully noted last year, Bill O’Falafel can’t even be bothered to sell “Christmas” rather than “holiday” ornaments on his own website.

Henninger’s column is only unique for the way he tries to find a way to blame the undependable laziness of loan-defaulting shiftless darkies on militant Northern atheists sticking it to big-box greeters. But as he well knows, and as Heywood points out again: it’s the consumerism, stupid.

Department stores want to sell as much shit to as many people as they can, so of course they’re always going to seek the path of least resistance, not wanting to drive potential customers away over something as trivial as the mumblings of an underpaid teenager or senior citizen standing at the front door. And maybe, just maybe, there is a basic sense of wanting to be respectful of all the different ways people spend this time of year, religious or not. How much of a twisted, rancid asshole do you have to be to convince yourself that that’s a bad ideal to aim for?

And I’ve seen it myself – the same people who will talk over Thanksgiving dinner about their plans to boycott Best Buy over their use of “Happy Holidays” will go stand in the freezing rain outside of Wal-Mart at three a.m. the next morning and get into a fistfight over who gets to be the first one in the door to buy the electric back-hair shaver with extendable arm. What the fuck does any of this have to do with the supposed Christian virtues? As Nietzsche wondered in amazement back in the 1880s: when you see all the things that Christians gladly participate in along with all of us hellbound sinners, you have to wonder where they draw the line between themselves and the world. What does it even mean to call yourself a Christian when you don’t do a single thing differently than the rest of us?

It’s bad enough that these shitheads turn a genuinely beautiful time of year into yet another round of culture warfare just for kicks, but what really infuriates me is the way they deride the secularism that has, ironically, helped make Christianity the strong, vibrant social force it is here. I’d be glad to go the way of Europe and have an official national church if it meant that religion itself would wither and fade away as a consequence; you’d think these idiots could realize, as did early evangelicals in the late 1700s, that it’s better for them if church and state stay as far apart as possible.

Christianity had about a 1500 year run of being synonymous with state power, and during that time, we never did see any of that peace and love stuff become official policy. In fact, as late as the 18th century, you could still have cases like the 21 year-old Thomas Aikenhead, executed for blasphemy. Or Jean Calas, posthumously found innocent after having been tortured to death. Or Jean-François de la Barre, tortured, beheaded and burnt for the absolutely heinous, horrific crimes of not removing his cap for a religious procession, possessing a copy of a book by Voltaire, and being suspected of having vandalized a wooden crucifix. But in the 250 or so years since we separated church and state here, it’s become common sense that killing someone over differing religious beliefs is unthinkable. Again, how much of a twisted, rancid asshole do you have to be to not be proud of that fact, let alone try to change it?

« Now I’m a Believer, Not a Trace of Doubt in My Mind» I Fake It So Real I Am Beyond Fake