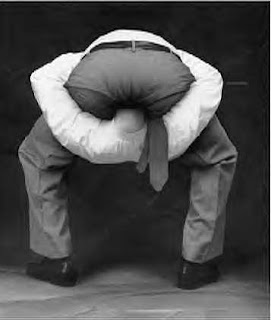 (Are you there, God? It’s me, Starchild Moonflower.)

Yeah, now that you mention it…

Among the set of concerns (let’s call them) that led me to start Mystic Bourgeoisie, was the question of why certain New Age types — especially those who most vehemently deny that’s what they are — seem to believe that the answers to all life’s most profound questions are to be found, you know…

Even if your literary masochism amounts to but a fraction of my own, you can’t avoid running into this bizarre concept if you read anything in this genre. Look within, my child, and your questions shall be answered!

I don’t have an answer for that either, but my hunch would be that it has something to do with the general narcissism that pervades all forms of what you could loosely group together under the New Age rubric. A more generous interpretation might be one that considers the way hermits like (the possibly mythical) Lao Tzu, after a lifetime of watching the human tragi-comedy, retired to a life of quiet contemplation, realizing that at a certain point, the patterns stand out more vividly than the individual elements, the big picture seems more relevant than the minutiae, there’s nothing new under the sun, plus ça change, and all that.But that’s probably too generous for most who make a fetish out of that notion.

Actually, I think what annoys me about the whole New Age/spiritual thing is that it seems to combine parts of Romanticism with the naïve, typically 19th century, faith in progress.If Romanticism was mainly an aesthetic reaction against what was perceived as a stifling rationalism and Enlightenment obsession with order, it seems fair to me to see parallels with the way people today prefer to be “spiritual” in opposition to “organized religion”. Don’t worry about what religious leaders and holy books say, go with what moves you and feels right. The difference being, the Romantic artists were willing to go to extremes to be authentic and prove the vitality of their vision, even if it meant drinking and drugging themselves into a stupor, going insane and dying young. Can’t quite imagine OprahChopra and Neale Donald Walsch approving of all that.

No, they seem to accept a version of the notion of teleological progress people used to have; that life was on a constant upward trajectory, there was little that couldn’t be solved by education and technology, and every year was an improvement on the one before it. Maybe it was like the sunny side of Social Darwinism, where “evolving” meant constant improvement in a moral and intellectual sense (and there are lots of people who still use it that way), even though, in the Darwinian sense, it only means adaptation, not progressivism.

So, if negativity is acknowledged at all, it’s only as a learning experience on your path of personal growth, which winds its way through a neat and tidy scheme where “everything happens for a reason” (another one of those clichés that makes me grind my teeth), and everyone and their mother’s a fucking “survivor”.

« You Lost, Get Over It» Credit Where Due