August 7, 2009 By Damian in extraordinary popular delusions, foolosophy, the madness of crowds No Comments 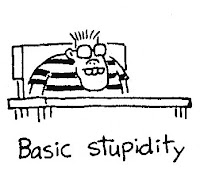 A minor quibble: I can vouch that the “euthanizing old people” stuff isn’t believed exclusively by conservatives. About a week before this became news, I got one of those mass emails forwarded to me* from a professional acquaintance warning of this, and it took a few back-and forth exchanges before she finally either accepted that there was no government plan for euthanasia or just wrote me off as one of Them.

She’s not a doctrinaire conservative, although she is also a firm believer in La Reconquista being official policy of the Mexican government — for one thing, she can’t believe that the global warming denialists can be so stupid. She has no problem understanding that mega-corporations like ExxonMobil that make tens of millions in daily profits just might be tempted to lie and fudge data and generally be as obfuscatory as they can in order to keep those profits from being threatened by changes in our fossil fuel consumption (as opposed to the alternative of Al Gore being involved in a conspiracy with every reputable climatologist on Earth to destroy global capitalism and force us all to live in caves and forage for grubs and berries), but it doesn’t seem to have occurred to her that the for-profit health insurance industry might be similarly motivated (as opposed to the alternative that Obama really does have a Stalinist streak and sees a million premature old codger-deaths as just a statistic). It reminds me that Digby, some months ago, took issue with the conventional wisdom that says this country is too ideological and polarized. She suggested that often times, people aren’t ideological enough, meaning that in cases exactly like this, they haven’t even devoted a few minutes to establishing some ground rules, some basic pattern of principles underlying the rhetorical needlework of specific issues. They just go with their knee-jerk reactions. (For that matter, too often, this is also what passes for being an independent thinker, or – sigh – a “maverick”. Wild, superficial incoherence being mistaken for originality or independence.)

I believe the philosopher Forrest Gump’s maxim had it that “stupid is as stupid does,” and pace John Stuart Mill, I’m afraid I have to admit that conservatives don’t have a monopoly on stupid people (New Agers? Come on — they may be affably harmless, but have you ever met people with a worse case of reality-aversion syndrome?) Yes, different political philosophies seem to dispose one towards different types of conspiratorial thinking, but I think the underlying theme is one of being unable to think contextually, to be shockingly ignorant of current social and political realities, to think that certain events can happen like a bolt out of the blue simply because somebody wills them to happen.

*And while I’m thinking of it, how about you lazy fuckers delete the addresses of all those who received the email before forwarding it on to others? I don’t particularly care to know the last ten stops this piece of shit made before landing in my inbox. Thanks much.

« Marduk and Baal Were Probably Involved, Too» Where Do I Sign?