January 15, 2010 By Damian in augean stables, foolosophy, media/propaganda, waiting for the barbarians No Comments 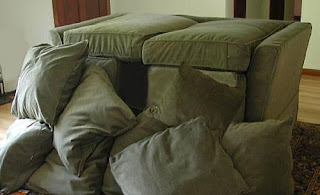 Ran out of Cheetos four days ago. Can’t reach the Xbox controller. The stench of unwashed sweatpants is everywhere. Now Blogger is down. When will it end, dear God, when will it end?

Shrill notes of hysteria creeping in:

It’s indisputably true that the political system is run by wealthy plutocrats and much of what passes for democracy is kabuki. Same as it ever was, I’m afraid. But that’s not exactly the point. It’s still worth participating, doing what you can, containing the damage, stopping the bleeding, fighting the fight — for its own sake. After all, history shows that humans have managed, somehow, to actually make progress over time. You just can’t know what will make the difference.

If you don’t think that’s worth anything, however, you do have a choice. The obvious alternative, as PinNC wrote in TBOGG’s comments, is this:

If you really think that the political system is broken beyond repair, you have a blueprint from the 1770s to help you out.

Pick up your muskets, kids, or STFU.

Just to be clear, what Digby is saying is: if you’re anything other than a Republican, you either shut your fucking ungrateful pieholes and keep voting for Democrats no matter what they actually do, or you start an armed revolution. There are no other choices. I love the smell of desperation and flop sweat in the morning.

It is true that you “just can’t know what will make the difference.” On that note, perhaps even refraining from participating in a useless charade might bring about the change we need! Who says it has to be forward action? Why not passive resistance? We’re getting all Tao Te Ching up in here now!

But really, it apparently hasn’t occurred to her that “participating, doing what you can, containing the damage, stopping the bleeding, fighting the fight” is not restricted to voting for candidates for national office. There are all sorts of ways to be active for social and political issues that don’t depend on being a fearmongering partisan hack for the left wing of the Big Business party. (Noam Chomsky, to name an example that Digby just cited a couple weeks ago, apparently while remaining unaware of much he’s ever said, has talked about this more times than anyone can count.) Ironically, if Mobetta Democrat bloggers like her hadn’t successfully convinced so many people otherwise, she wouldn’t be seeing so many frustrated, despairing comments on her blog from people who have no other outlet for venting. If you get people all worked up into a fever pitch over how the Democratic party is all that stands between us and the Republicans WHO OH DEAR SWEET JEEBUS WILL MURDER THE PLANET MAYBE EVEN LIFE ITSELF IF THEY WIN THIS ELECTION AIIIEEEE, and they see those Democrats consistently underperform beyond anyone’s expectations, what the hell do you expect them to say?

She quotes Chris Hayes as saying, “In an oligarchy, the only way to get change is to convince the oligarchs that it is in their interest–and increasingly, that’s the only kind of change we can get.” Well, Digby, how exactly is it in the Democrats’ interest to bust their ass for you when you’ve already assured them you’ll vote for them no matter what? “Let’s see: I work hard to push a liberal agenda, risk my political career, they vote for me. I spit in their face and tell them to suck my ass while I coddle a small group of independent voters, they vote for me. Decisions, decisions!” They don’t fear any retribution from you, and they were never your friends to begin with, so what do you have left?

As the wise elders of the blogosphere keep telling us, politics is all about negotiation and compromise. The art of the possible. And these are the realistic grownups? The ones who think you begin to bargain by immediately informing the other person that you so desperately want what they have (or want to keep someone else from having it), you’ll give them everything they want and then some?