People Have to Watch What They Say

January 17, 2010 By Damian in augean stables, history, media/propaganda, ohferfucksake, waiting for the barbarians No Comments 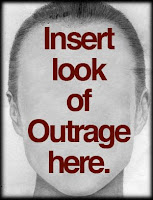 You should be horse-whipped for the insult you have paid to the highest office of our nation.

[C]onsider what you imply. Obama will aid Haiti to please African-Americans. Haiti has lost untold thousands of lives. One third of the population has lost its homes. Countless people are still buried in the rubble. Every American president would act quickly to help our neighbor. You are so cynical and heartless as to explain Obama’s action in a way that unpleasantly suggests how your mind works.

Well, since we’re going for the subtle approach here, maybe you could embed an audio track in your column that plays weepy string music? How about a picture of Jesus crying as he looks over the shoulder of rescue workers? I mean, relief efforts are not one bit dependent upon Rush Limbaugh finding it within himself to cease being a GOP propagandist for a brief spell, so please, ease up on the “Well I NEVER! How DARE you blah blah blah EVEN AS PEOPLE ARE DYING RIGHT THIS MINUTE…” stuff. A less generous reader than myself might find that a touch cynical.

He suggested Obama would steal money from people suffering horribly, and that he would give humanitarian aid at least partially due to calculating domestic political considerations. Given what we know our presidents have done, why is this so beyond the pale? Nixon could wax humanitarian over aid for Bangladesh while he was busy murdering Vietnamese, Cambodians and Laotians by the thousands. Reagan provided aid to El Salvador after an earthquake, and he still had no problems turning Central America on the whole into an abattoir. Clinton could feel people’s pain while using crippling sanctions to kill nobody-knows-how-many Iraqis, and his secretary of state could calmly (and infamously) state on television that “We think the price is worth it.” Jimmy Carter’s famed humanitarian instincts? Side by side with the usual considerations of state power (and hey, look, more Haiti history!)

A particular claim may or may not be stupid (and this is Limbaugh, of course), but to start sputtering, gasping and choking because someone said the president is capable of unbelievably callous acts is either historically ignorant at best or an equally cynical act at worst. And yes, Haiti’s suffering certainly has weighed heavily upon our minds for centuries, hasn’t it?

Rush Limbaugh should be horsewhipped just on general principle. For being a gelatinous sack of fetid sewage, if you need a specific reason. But presidents were made to be insulted. It’s an American tradition, by gawd, and one we should all enjoy. It’s bullshit when you invoke “respect for the highest office of the nation” as a reason to censor the Dixie Chicks, and it’s bullshit to try it now. And just to split hairs, the office and the man who occupies it at any given time are two different things.

Normal people do not seek power over what amounts, for all practical purposes, to the majority of the world’s population. You have to be a cold-blooded sociopath, in part if not in full, to take on that position. Every day, presidents make decisions that adversely affect countless people, some in the most severe way possible. If they earn respect, fine. But they aren’t entitled to a goddamned thing. Fuck all of them. Just because. And fuck anybody who has a problem with that.