February 7, 2010 By Damian in books, technology No Comments 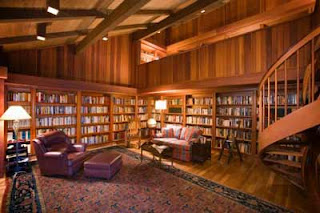 Did I want to sell? To my surprise, almost without exception, I did not. Seems I’ve formed an emotional attachment to them, I would miss them even if I never give them quality time and attention ever again. Guess that marks me as a bibliomaniac…So I have my answer as to the impact iPad likely will have on me personally: I’m still in the book-buying biz too.

Visiting my parents over the holidays, my mom started enthusing to me about how she had made several hundred dollars selling a lot of her unwanted books on Amazon, and recommended I should do it too, since I have so many. I don’t think I could have been more viscerally shocked if she had suggested I should kill and eat my dogs. “Unwanted” books? Does not compute!

I am grateful to her for at least making it so that I grew up in a house where books were absolutely everywhere, and trips to the bookstore were a cause for jumping for joy. She tended towards a lot of pulp fiction and New Age spiritbabble (even more so now, with a heavy helping of lunatic Republican propaganda thrown in), but still, to a little kid, it was all fascinating. I recall her laughing once, when I must have been five or six years old, and she found me gamely trying to pretend I was deeply into some Bruce Catton book about the Civil War. Pretensions of intellectuality even then!

But such a casual attitude toward buying and disposing of books…that’s just utterly foreign to me. Not just because money isn’t quite so free as to allow me the opportunity to waste it on books I’ll never read; there’s a whole process involved in obtaining them that makes them more than just objects to me. Like I said, just being in a bookstore is a special event for me. Having the luxury to browse for a couple hours is even better. I’ll make a mental list of anything that looks interesting and look them up on Amazon’s network of independent sellers with used copies, where I usually find them for a fraction of the price. Then I get to enjoy the anticipation of waiting for it to show up in the mail. And you can damn sure bet that I’m going to actually read anything I’ve bothered to check into and buy, not just toss it aside and lose interest in it.

Or maybe I’ve just had a topic on my mind, perhaps even just an inchoate mess of thoughts loosely orbiting a vague subject, and I’ll just get online and start searching to see what, if anything, has been written about it. I’ve already lost count of how many times I’ve been thrilled to find the perfect book, one I had never seen in a store and didn’t even know existed.

So there’s almost always a little history between me and any given book; maybe, just like how certain songs always have the ability to pin themselves to certain events in your life, and instantly allow you to relive them upon hearing the song again, looking at a book reminds me what was going on in my life at the time when I read it, and makes particular memories more vivid. The whole book buying/reading/collecting experience is an integral part of my identity; it’s not something subject to utilitarian considerations of convenience and practicality.

Besides, how much you wanna bet that people in such a hurry to get rid of all their bookcases are just going to fill the space with some bric-a-brac and ugly furniture?