May 30, 2010 By Damian in foolosophy, psychology, waiting for the barbarians No Comments 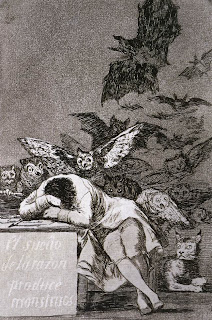 Do you think that Beck’s a true believer in his own shtick or a snake oil salesman out to make a buck off the suckers. Or maybe a little of both?
This is everybody’s favorite parlor game. I think for the most part he believes what he preaches. He has everything you need to become a hard-right true believer—recovering alcoholic, oversized spleen, not much of an education, and of course its made him very, very rich. Whether he actually thinks God is speaking through him or not, only he can say. But it’s certainly possible. His megalomania is unrivaled, and he clearly has at least a bat or two loose in the bell tower. But I don’t think he’s as crazy as some of his critics would like to think. He knows exactly what he’s doing. And beyond his admitted ADHD, I have no evidence of clinical diagnosis, though more than one former colleague I spoke to believes he was diagnosed bipolar in the 90s and was prescribed lithium. Ultimately, though, it doesn’t really matter whether he’s crazy or not, or whether he knows he’s spouting horseshit. The important thing is that he has a monthly media footprint of something like 30 million Americans. And that has consequences that cannot be parodied away.
– Alexander Zaitchik

Emphasis mine. From your lips to the progressive blogosphere’s collective ears, my friend.
I once had an argument with an academic from France over whether any of our domestic religious fanatics, or at least the ones with political power, actually take their professed beliefs seriously. At one point, he lost his temper and started ranting about “typical stupid, American liberals” who take such things at face value and can’t see how it’s all a contrived ploy for power and money. So you can imagine how I laughed and laughed when it came out that George W. Bush actually believed enough to call Jacques Chirac and attempt to sell him on the necessity of invading Iraq by talking about Gog, Magog and the Apocalypse. Talk about disappearing into your role!
Maybe it’s the Nietzschean influence, but I’ve always been deeply struck by how irrational people are when you scratch the surface, how little of a role self-awareness and reason play in our actions, how so many of our justifications for them are ex post facto stories we tell to ourselves to help maintain a sense of coherent, lasting identity. Even though it’s certainly disturbing to think that someone could pull off such a calculated scam, I imagine it terrifies people even more to have to consider that there aren’t necessarily any safeguards to prevent seriously crazy people from gaining wealth, power and influence.
« Saturday Shuffle» The Eternal Recurrence of the Same