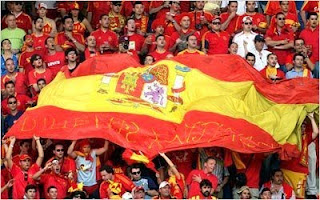 So often, games that look like blockbusters on paper fail to live up to expectations, with one or both teams playing tentatively, and this was no exception, with the Netherlands especially resorting to overly physical play to disrupt Spain’s rhythm. The Germany/Spain semifinal was actually a much more enjoyable game to watch from a spectator’s perspective. But still, a World Cup final is exciting in any event, and Spain has clearly been the best team in the world for the past couple years, so I’m thrilled to see them as champions.

Other notes: Germany should only get better in the next few years, and I would be shocked if they’re not in the final of the Euro tournament in two years, or in that of Brazil in 2014. They’re a very young team that should keep their core together for another several years, and I look forward to seeing atypical German midfielders like Marko Marin and Mesut Özil playing a huge role in their future. And I was really glad to see Thomas Mueller win not only the Young Player of the Tournament award, but the Golden Boot as well for his five goals and three assists. At only twenty years old, he could end up being one of the all-time greats easily, with a likely three more World Cups in his career to come.
I do feel for the Dutch, now that they’re going to shoulder the burden of all the conventional “wisdom” that prosaic commentators relied on when talking about Spain for the last couple years. All I’ve heard since the last World Cup is how Spain can’t win the big games, they’re perennial underachievers, they’ll always find a way to choke. You might have thought that winning the Euros in 2008 might have silenced that, but no, then we heard how the extra pressure resulting from that would be their undoing, with other irrelevant trivia used as a bulwark: no team has gone on to win the Cup after losing the first game of group play, only two teams have ever won the Cup as current European champions, and on and on. Dear sports pundits: correlation is not causation. Trivia is descriptive, not predictive. And no, there is no such thing as psychic ability, especially not in an octopus.
Seriously, I’ve been amazed at hearing commentators conflate twenty, forty, or even sixty years worth of particular national teams and talk as if the same twenty-three players have been involved in all of them. There is no mystical élan vital tied to nationality that plays a role in how these teams perform. You know what all those players have in common? A language and a passport. That’s it. It’s meaningless to talk about teams having a set identity beyond perhaps a decade or so, when the core of the team ages and retires. The Spain of 2010 has nothing to do with the Spain of 1998, let alone the teams from years before any of the current players were even born. Ten of the eleven players in Spain’s starting lineup today play their club football for Barcelona or Real Madrid, the two teams that have dominated La Liga for the past several years, with 2004 being the last year that a different team won the league title, and they’ve both done pretty well in the Champions League too. The national team has only lost two games since November of 2006, while winning, what is it now, forty-three, while also tying Brazil for the all-time record for most consecutive games without a loss? My point is: these particular players, the only ones that should matter for purposes of this discussion, have done almost nothing but consistently win everything they play, and yet, to hear the pundits talk, they’re walking around with an inferiority complex because of what the national teams of decades ago failed to achieve. Is this sort of inanity typical of all sports commentary? Is this a corollary to the cable news phenomenon in general, where the need to fill twenty-four hours of airtime means there’s no bottom limit to the stupidity that can be used as “analysis”?
Well, damn. It was a nice break from paying attention to the wider world for a month. Only one more month till the club season start back up!
Update: Oh, shut the fuck up. Look, the referee blew two major calls that I saw, and the first one ridiculously favored the Dutch. Nigel de Jong should have been ejected for his tae kwon do kick into Xabi Alonso’s chest less than thirty minutes into the game. 99 times out of 100, that would have been a straight red card followed up with a several-game suspension. It was one of the most brutal fouls I’ve seen in recent years. De Jong escaped with only a yellow; I suppose the Dutch would have preferred to play with ten men the remainder of the game? And it’s a credit to Alonso that he didn’t make a theatrical presentation out of it in an attempt to get de Jong ejected; do we need to try hard to imagine what Arjen Robben would have done with such an opportunity? They would have had to throw a net over him to hold him still for medical treatment, as he would have been spasming and flopping around like a fish out of water.
Speaking of Robben, that brings us to the second referee mistake, the goal kick that clearly should have been a Dutch corner kick late in overtime, just before the Spanish scored. If you had asked any Dutch player or fan before the game to choose between a) a corner kick late in overtime with the game a scoreless draw, or b) having Robben get two one-on-one chances against Iker Casillas during regulation time, which would they have picked? Yeah, exactly. And that’s what they got, only Robben blew both chances. It’s understandable that the Dutch would grasp at straws like this, but it’s highly unlikely that the game would have turned out differently anyway. They had their chances to put the game away and couldn’t do it. So it goes.
« O Glorious Day!» Certum Est Quia Impossibile Est