The Cut of Her Gibberish

July 20, 2010 By Damian in bread and circuses, fresh hell, language, waiting for the barbarians No Comments

Buzz “King Buzzo” Osborne once explained his lyrical philosophy thus: it’s hard to play guitar and concentrate on singing at the same time. It’s much easier to just open your mouth and let the, uh, “words” flow, all stream-of-consciousness-like. Besides, he said, fans will get what he means just by the way he sings it. The voice becomes just another instrument, full of sound and fury, signifying nothing.
So, anyway, I was just sitting around the other day, when I abruptly felt a great disturbance in the Force, as if millions of English teachers had suddenly cried out in terror and anguish. I feared something terrible had happened. So I says to myself, I says, “Self? Did Sarah Palin just say something incredibly stupid again?”
Why, yes. Yes, she did. 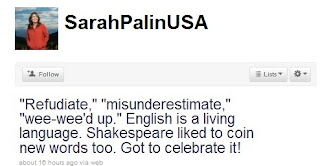 So, it appears that Refute was cruising merrily down the weed-choked dirt road of Sarah’s mind, hands at ten and two o’clock, music at a sensible volume, on its way to a job interview, when suddenly, Repudiate comes barreling down the old washboard side road, checking its makeup in the visor mirror and texting while trying not to drop that awesome BK® Quad Stacker on the floor, and by the time it notices the sign, there’s no way to come to a full stop with all that gravel on the road. You can imagine the rest.
Whereupon Sarah, never being one to let fresh flatmeat go to waste (it’s like huntin’ without having to use up any precious bullets!), scurries over with her handy Roadkill Removal kit to stake her claim. Now, after a trip to the taxidermist, she’s parading around, brandishing the trophy like Trig at a campaign stop, proud of what she’s done.
An actual new word would be one thing. Even a portmanteau could be clever, a way to define a nuance that had previously been ignored. But nobody ever saw any shades of grey between “refute” and “repudiate” that needed addressing. Even if you wanted to be generous and chalk it up as a typo, the P and the F are too far apart on the keyboard for that to be plausible. (And what did adding the prefix “mis-” to “underestimate” accomplish anyway? Wouldn’t the “mis-” cancel out the “under” in that particular instance?)
Psst, Lewis Lapham: the wait is over. You were looking on the wrong side of the gate. They were inside all along.
« A Baby Bootie Stomping on a Human Face — Forever» A Long Time Ago We Used to be Friends