The Scarecrow Shadow of the Nazarene 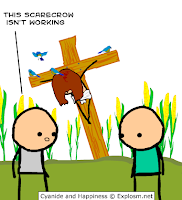 With all these God-believers, it is striking that most students — nearly 60 percent — don’t think sexual intercourse before marriage is wrong, at all. If you look at the table below, you can see that very small proportions — even among the conservative Christians — think it is absolutely wrong. Eighteen percent of the Evangelical students think such sex is absolutely wrong. That’s less than the 25 percent of those students who took a virginity pledge.

[…] That Christian students tend to be more guilty about sex than Jews is not surprising. The history of Christianity is a long struggle against sex. The early Christian ideal was to be so infused with faith in Christ that one did not even experience sexual desire. A faithful Christian who was able to achieve self-mastery could free himself from this world. In this, they promoted the radical idea that women could be equal to men. The leaders of the Jesus movement urged those who could to cease all sexual intercourse in preparation for the coming of the Messiah. It was St. Augustine, writing in the fourth century — who described himself as being a slave to an “insatiable lust” — who put forward the position that our sexual desires are divine punishment for our original sin, an obstinate independence of will. That original sin, Augustine argued, was transmitted down through the ages through our semen. This not only made sex shameful, it made virgin birth essential.

There are sexual differences between different forms of Christianity. As you can see in the table above, it is the Protestants, not the Catholics, who are more likely to find sex outside marriage to be sinful. You might expect exactly the opposite. For Catholics, marriage is a sacrament, a visible sign of God’s grace; for Protestants it is not. The Protestants broke with the Catholic church in part over sex, that their priests and popes were having it anyway. The first thing their clergy did was to go out and get married. The difference between a Catholic and a Protestant is that the latter faces God alone, without the mediation of a priest who can confess and absolve sins. The Protestant carries his religious fate in his own hands; he or she must look to his own will as a mark of his salvation. Protestantism depends on a psychic structure of self-control in a way that Catholicism does not. Protestantism runs off a guilt that cannot be absolved.

This difference, I think, shows up in young people’s private lives. We asked students how their last sexual encounter had made them feel in relation to God. A third of the Protestant students felt distant from God after their last sexual act, compared to a quarter of the Catholics and less than one-seventh of the Jews. Protestants tend to be the guilty ones. But just because Protestant are more likely to think that sex is wrong doesn’t mean they are not having it.

The fear of death vs. the most primal expression of life. The irresistible force meets the immovable object. Well, religion had a good run of it, trying mightily to keep the lid tamped down on all those carnal urges, but it was always inevitable that people would rationalize a way to have their God and their sex lives too.

Slightly different context, but this reminded me of a line from an essay by Lee Siegel I read recently:

What all this means is that, finally … Americans are growing up about sex! For what these women really seem to be complaining about is that sex is no longer treated as though it were some momentous experience that is sacredly separate from the rest of life. Three cheers for that.

« Yesterday’s Rebels» As Above, So Below