August 6, 2010 By Damian in ohferfucksake, samesecks, waiting for the barbarians No Comments 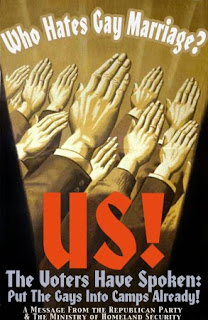 Gallagher the watermelon-smashing comedian may be a crazed reactionary lunatic these days, but I do remember a line of his that made me laugh way back when: “A politician says plus at the beginning of a sentence and minus at the end so it don’t add up to nothin’!”

I wonder what made me think of that after all these years?

Senior adviser David Axelrod said the president supports “equality” for gay and lesbian couples, but did not address directly Obama’s position on Wednesday’s court ruling, which struck down as unconstitutional California’s Proposition 8, a 2008 ballot initiative banning same-sex marriage in the state.
“The president does oppose same-sex marriage, but he supports equality for gay and lesbian couples, and benefits and other issues, and that has been effectuated in federal agencies under his control,” Axelrod said on MSNBC.
Axelrod noted that Obama had opposed Prop 8 all along.
“The president opposed Proposition 8 at the time — he felt it was divisive and mean spirited,” he said, adding that Obama believes that governing marriage is “an issue for the states.”

He supports equality for gay couples and all the benefits of marriage, but not marriage itself, which he feels is an issue best left to the states, except when a state initiative bans it, in which case it’s divisive and mean-spirited and he opposes it. Got it. Jesus, why not just flip a coin before answering?
Remember Carrie Prejean? The beauty queen who was asked by Perez Hilton for her views on gay marriage (because we were all dying to know before making up our own minds), and when she said she was against it, became an easy target for all sorts of invective and abuse? Well, do you remember what she actually said? Can you guess which one of the following was her, and which was our mystery contestant?