August 11, 2010 By Damian in waiting for the barbarians No Comments 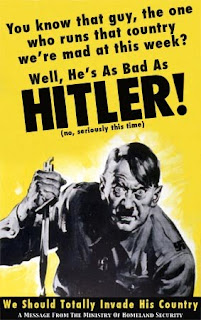 As I settled down to read through the beginning of the propaganda campaign to bomb Iran, I said to myself, I said: “Self, how long will it take before we hear you-know-who invoked?”

Three paragraphs, baby. I’m glad I didn’t put any money on it, because even I wasn’t that jaded!

In these conversations, which will be fraught, the Israelis will tell their American counterparts that they are taking this drastic step because a nuclear Iran poses the gravest threat since Hitler to the physical survival of the Jewish people.

“In World War II, the Jews had no power to stop Hitler from annihilating us. Six million were slaughtered. Today, 6 million Jews live in Israel, and someone is threatening them with annihilation. But now we have the power to stop them. Bibi knows that this is the choice.”

However, I did mostly agree with this quote from Netanyahu:

“You don’t want a messianic apocalyptic cult controlling atomic bombs,” he said. “When the wide-eyed believer gets hold of the reins of power and the weapons of mass death, then the world should start worrying, and that’s what is happening in Iran.”

In Iran, huh? Again, I remind you:

Incredibly, President George W. Bush told French President Jacques Chirac in early 2003 that Iraq must be invaded to thwart Gog and Magog, the Bible’s satanic agents of the Apocalypse.
Honest. This isn’t a joke. The president of the United States, in a top-secret phone call to a major European ally, asked for French troops to join American soldiers in attacking Iraq as a mission from God.
Now out of office, Chirac recounts that the American leader appealed to their “common faith” (Christianity) and told him: “Gog and Magog are at work in the Middle East…. The biblical prophecies are being fulfilled…. This confrontation is willed by God, who wants to use this conflict to erase his people’s enemies before a New Age begins.”
This bizarre episode occurred while the White House was assembling its “coalition of the willing” to unleash the Iraq invasion. Chirac says he was boggled by Bush’s call and “wondered how someone could be so superficial and fanatical in their beliefs.”

However, Noam Chomsky reminds us that it’s true, no sane person should want Iran to have nuclear weapons. Of course, he also reminds us what sorts of things, besides a military attack, could be done about it, and why they never will be:

No sane person wants Iran to develop nuclear weapons; or anyone. One obvious way to mitigate or eliminate this threat is to establish a nuclear weapons-free zone (NWFZ) in the Middle East. The issue arose (again) at the NPT conference at United Nations headquarters in early May 2010. Egypt, as chair of the 118 nations of the Non-Aligned Movement, proposed that the conference back a plan calling for the start of negotiations in 2011 on a Middle East NWFZ, as had been agreed by the West, including the US, at the 1995 review conference on the NPT.
Washington still formally agrees, but insists that Israel be exempted — and has given no hint of allowing such provisions to apply to itself. The time is not yet ripe for creating the zone, Secretary of State Hillary Clinton stated at the NPT conference, while Washington insisted that no proposal can be accepted that calls for Israel’s nuclear program to be placed under the auspices of the IAEA or that calls on signers of the NPT, specifically Washington, to release information about “Israeli nuclear facilities and activities, including information pertaining to previous nuclear transfers to Israel.” Obama’s technique of evasion is to adopt Israel’s position that any such proposal must be conditional on a comprehensive peace settlement, which the US can delay indefinitely, as it has been doing for 35 years, with rare and temporary exceptions.
At the same time, Yukiya Amano, head of the International Atomic Energy Agency, asked foreign ministers of its 151 member states to share views on how to implement a resolution demanding that Israel “accede to” the NPT and throw its nuclear facilities open to IAEA oversight, AP reported.
It is rarely noted that the US and UK have a special responsibility to work to establish a Middle East NWFZ. In attempting to provide a thin legal cover for their invasion of the Iraq in 2003, they appealed to Security Council Resolution 687 (1991), which called on Iraq to terminate its development of weapons of mass destruction. The US and UK claimed that they had not done so. We need not tarry on the excuse, but that Resolution commits its signers to move to establish a NWFZ in the Middle East.
…One practical step in this direction is establishment of NWFZs. Another is to withdraw support for the nuclear programs of the three non-signers of the NPT. As often, rhetoric and actions are hardly aligned, in fact are in direct contradiction in this case, facts that pass with as little attention as most of what has just been briefly reviewed.
Instead of taking practical steps towards reducing the truly dire threat of nuclear weapons proliferation, the US is taking major steps towards reinforcing US control of the vital Middle East oil-producing regions, by violence if other means do not suffice.

« I Predict a Riot» Accept No Invitations