All Them Books I Didn’t Read, They Just Sat There On My Shelf Looking Much Smarter Than Me (IV)

December 29, 2011 By Damian in books, extraordinary popular delusions, so many books, so little time No Comments 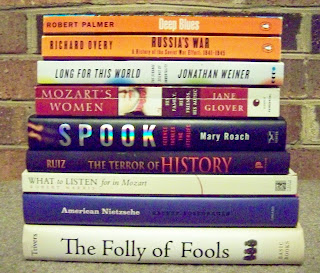 Oh, no, I haven’t finished all the ones from the last picture I took. These are just the ones I’ve added to the list since then.

I did finish Spook last night, though. It was well written and laugh-out-loud funny at times, but it ended up on that annoying note of supercilious evenhandedness so typical of people who write about religion and science as if reconciling them is the most important thing. Like this:

“I guess I believe that not everything we humans encounter can be neatly and convincingly tucked away inside the orderly cabinetry of science. Certainly most things can—including the vast majority of what people ascribe to fate, ghosts, ESP, Jupiter rising—but not all. I believe in the possibility of something more—rather than in any existing something more (reincarnation, say, or dead folks who communicate through mediums). It’s not much, but it’s more than I believed a year ago… Perhaps I should believe in a hereafter, in a consciousness that zips through the air like a Simpsons rerun, simply because it’s more appealing—more fun and more hopeful—than not believing. The debunkers are probably right, but they’re no fun to visit a graveyard with. What the hell. I believe in ghosts.”

Not to mention that she approvingly cites “Maria’s shoe“, of all things, as being the closest thing to a “dazzle shot”; i.e., a case that would be extremely difficult to refute.