February 7, 2012 By Damian in augean stables, jesus tie-dyed for your sins, ohferfucksake, religion, tribalism No Comments 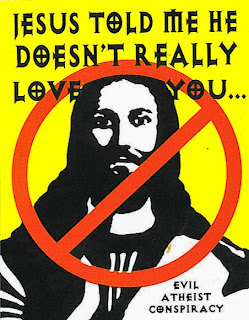 As someone who has spent many happy hours studying Christian theology, from Origen to Hans Kung, as well as modern scholarship about Jesus, I supposed I should be pleased by this eruption of holy fervor among the Republican candidates for the highest office in the land. But there’s just one little problem.

Jesus would have been appalled by the whole pack of them.

We do not know very much about the historical Jesus. But everything we know indicates that the carpenter from Galilee would not have been pleased to learn that this pack of coldhearted, sanctimonious, wealth-exalting politicians were claiming to be his followers.

I’m not saying that Jesus would have been a Democrat. Anyone who pretends to find support for specific political policies or ideologies in the Bible is delusional. Scholars cannot agree if Jesus was a social revolutionary, a tortured mystic, or something altogether different. Even what Jesus himself believed about the most essential aspects of what was to become “Christianity’ – a religion founded not by him, but by his disciple Paul of Tarsus — is unclear. As leading biblical scholar Bart Ehrman noted in “Jesus, Interrupted,” some of the most important Christian doctrines, including the divinity of Christ, the Trinity and the concept of heaven and hell, were not held by Jesus himself: They were added later, when the church transformed itself into a new religion rather than a Jewish sect.

Ehrman told me that the authors of the four Gospels portray Jesus in such contradictory ways that there is no intellectually honest way to reconcile them. Mark, for example, depicts Jesus as doubting and despairing on the way to the cross, while Luke portrays him as calm. Ehrman argues that such contradictory accounts can only be reconciled by creating, in effect, a bogus “fifth Gospel” that does not exist.

But having said all that, we still have the evidence of the Bible itself. And one does not need to believe in the infallibility of that document to see that the Jesus who is depicted in it was implacably opposed to authoritarianism, warmongering, contempt for the poor, exaltation of wealth, conformity, and sanctimoniousness – in short, everything the contemporary Republican Party stands for.

Don’t you just love it? 1. Forcefully stated premise. 2. Immediate waffling, extreme qualification of premise and hedging of bets. 3. Forcefully re-stated premise as if step 2 never even occurred. What a fucking hack.

First of all, let’s put it plainly: who gives a fuck what he supposedly said? If you don’t believe in his divinity, what special moral authority does he hold and why would you be impressed by his fortune-cookie bromides? But anyway, even judging by said document, the guy who was “implacably opposed to authoritarianism” also told his followers that they couldn’t be his disciple if they didn’t love him more than their family members and yea, even their own life. Then there was that whole “way, the truth and the life” thing, and the odd emphasis on blind faith in him personally being the difference between salvation and damnation. You know, I think that all covers conformity and sanctimoniousness fairly well, too.

Might as well quote this again while I’m at it:

If Jesus was not the prophet of love and tolerance that he’s commonly thought to be, what kind of person was he?

I think he was your typical Jewish apocalyptic preacher. I’m not the first to say that. Bart Ehrman makes these kinds of arguments, and it goes back to Albert Schweitzer. Jesus was preaching that the kingdom of God was about to come. He didn’t mean in heaven. He meant God’s going to come down and straighten things out on Earth. And he had the biases that you’d expect a Jewish apocalyptic preacher to have. He doesn’t seem to have been all that enthusiastic about non-Jews. There’s one episode where a woman who’s not from Israel wants him to use his healing powers on her daughter. He’s pretty mean and basically says, no, we don’t serve dogs here. He compares her to a dog. In the later gospels, that conversation unfolds so you can interpret it as a lesson in the value of faith. But in the earliest treatment, in Mark, it’s an ugly story. It’s only because she accepts her inferior status that Jesus says, OK, I will heal your daughter.

But wasn’t Jesus revolutionary because he made no distinctions between social classes? The poor were just as worthy as the rich.

It’s certainly plausible that his following included poor people. But I don’t think it extended beyond ethnic bounds. And I don’t think it was that original. In the Hebrew Bible, you see a number of prophets who were crying out for justice on behalf of the poor.

Anyway, assuming such a person even existed, given how heavily the “historical” details of his life were cribbed from earlier pagan myths, and overlooking the fact that the Gospels were written as propaganda, as opposed to a scholarly attempt to preserve an accurate historical record, he may or may not have had a genuine concern for the poor and downtrodden (as long as they weren’t Gentiles). Or he could have been like many other social revolutionaries since then who masked their own resentment and powermad lust for destruction behind egalitarian platitudes. But one thing should be crystal-clear: if presented with the latest crop of Republican presidential candidates, Jesus would certainly be dumbfounded, flabbergasted and shocked speechless…that the world didn’t end in a fiery apocalypse two thousand years ago like he assured his followers it would. I’ll keep saying it again and again: the people who most faithfully embody the spirit of Jesus in the modern world are the guys wearing sandwich boards and hollering psychotically about the end of the world.

« It’s a Steady Job, and He Don’t Wanna be a Paperback Writer» Hitler on Ice