You Will be Assimilated

I hit enter. My eyes immediately jump to the top left of the screen. The page loads and my heart drops. All I can see is blue. Blue, the color of 21st century social mediocrity. The color of people’s indifference towards you.

But if today’s Internet has a Baron Haussmann, it is Facebook. Everything that makes cyberflânerie possible — solitude and individuality, anonymity and opacity, mystery and ambivalence, curiosity and risk-taking — is under assault by that company. And it’s not just any company: with 845 million active users worldwide, where Facebook goes, arguably, so goes the Internet.

It’s easy to blame Facebook’s business model (e.g., the loss of online anonymity allows it to make more money from advertising), but the problem resides much deeper. Facebook seems to believe that the quirky ingredients that make flânerie possible need to go. “We want everything to be social,” Sheryl Sandberg, Facebook’s chief operating officer, said on “Charlie Rose” a few months ago.

…The implications are clear: Facebook wants to build an Internet where watching films, listening to music, reading books and even browsing is done not just openly but socially and collaboratively. Through clever partnerships with companies like Spotify and Netflix, Facebook will create powerful (but latent) incentives that would make users eagerly embrace the tyranny of the “social,” to the point where pursuing any of those activities on their own would become impossible.

…Besides, isn’t it obvious that consuming great art alone is qualitatively different from consuming it socially? And why this fear of solitude in the first place? It’s hard to imagine packs of flâneurs roaming the streets of Paris as if auditioning for another sequel to “The Hangover.” But for Mr. Zuckerberg, as he acknowledged on “Charlie Rose,” “it feels better to be more connected to all these people. You have a richer life.”

But, she said, the “fetishization of connection itself” fascinated her.

“Who cares that we can connect?” she said. “What’s the big deal? I think Facebook is colossally dull. I think it’s like everyone coming to live in a huge Soviet apartment block, [in] which everyone’s cell looks exactly the same.” 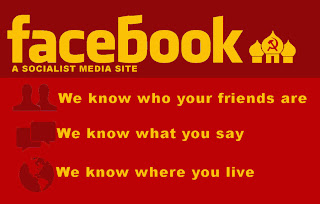 I still have a couple friends who periodically complain about my non-presence, and one of them sent the official invite through Facebook itself. I immediately marked all such messages as spam, but the fuckers still get through somehow, sending me reminders telling me that they will add my biological and technological distinctiveness to their own.