A Dog and a Man Who Walked Together for a Time

February 25, 2012 By Damian in animals, the big sleep No Comments 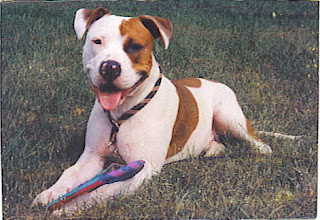 When he was about six months old, I rescued him from the projects, where his owners had tested him to see if he was “game”, i.e. possessed of good fighting qualities. Apparently he wasn’t. When I got him, he was sunburned from being tied out in the yard, with bite wounds on his face. The physical scars mostly faded after several years, but he never did recover from the trauma of it. You couldn’t possibly have designed a sweeter, more loyal, loving dog, but only the few members of his pack would ever get to see that side of him. He remained implacably mistrustful of strangers, both people and dogs, and always did his best to scare off any that came within view.

I spent the last few weeks trying my best to be as mindful and present as I could be, appreciating every moment I had with him. Sitting on the back porch during mild days, his head in my lap, brushing his soft white fur, trying to fix the sensation of it against my fingertips in my memory. Quietly watching the rise and fall of his chest, the twitch of his muzzle, during the times when pain medication brought him the chance to sleep soundly. Trying to note every peripheral detail about such moments — what I was wearing, what else was going on around me, the date and any associated significance — in order to create a tight web of association around them, each adhesive strand hopefully serving to affix the memory that much firmer in place.

Everything contains the seeds of its opposite, though, and the peril of trying to sustain such intense focus is that it becomes difficult to act when necessary, to shake off the immense, crushing significance of the moment. I was all too aware that I was preparing his last meal this morning. Each slow step we took around the perimeter of the yard thudded in my consciousness like a countdown, knowing it was the last walk I would ever take with him, terrified of reaching the end of it. The way he instinctively started to head back into the house when we were done, pulling gently against the leash, and the way I almost completely broke down when he turned toward me questioningly, wondering why the routine was changing. Those vivid memories may be a comfort to me one day when time softens their edges, but for now…

Yet some pain is as massive and unyielding as stone, against which the waves of our rational awareness break into scattered spray. Which is probably for the best. Not for me the rigid self-control and abstract, over-rationalized “happiness” of Stoicism. I’d rather have the slightly clouded perception and honest sobs of grief that come with watching a particular, irreplaceable experience of happiness slip through my fingers like water.

What I was trying to do in recent days was to preserve the vitality and vibrancy of his presence through sheer force of will, as if by concentrating hard enough, I could resurrect him in living detail whenever I wanted to. As if intense heartache and desire could be focused like a laser to burn a hole in the veil between memory and the moment, allowing him to step back through to me, the corner of his mouth turned up in that happy, welcoming smile of his, the one that’s already causing my solar plexus to throb just picturing it.

There will be years and years, each small forgetting a betrayal, each small betrayal a comfort, each small comfort another death. There is no lesson here, no lesson. Narcissus sought himself reflected in the world and found only death. Plums will bloom until there are no more plums. I will join him diffused into the soil, our component atoms intermingled one day soon, a dog and a man who walked together for a time, a brief spark of sweetness in an aching world.