All Them Books I Didn’t Read, They Just Sat There on My Shelf Looking Much Smarter Than Me (X)

June 10, 2013 By Damian in books, montaigne, so many books, so little time No Comments 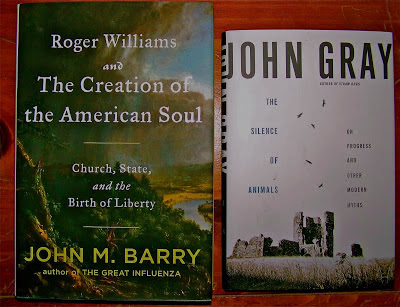 Two more additions to the stack. This is just a fun-sized edition of ATBIDR…, you might say.

That tour guide last year tried to tell me that William Penn was the first to create genuine freedom of worship in the colonies. The jacket copy of Barry’s book says, however:

For four hundred years, Americans have wrestled with and fought over two concepts that define the nature of the nation: the proper relation between church and state and between a free individual and the state. These debates began with the extraordinary thought and struggles of Roger Williams, who had an unparalleled understanding of the conflict between a government that justified itself by “reason of state”-i.e. national security-and its perceived “will of God” and the “ancient rights and liberties” of individuals.

This is a story of power, set against Puritan America and the English Civil War. Williams’s interactions with King James, Francis Bacon, Oliver Cromwell, and his mentor Edward Coke set his course, but his fundamental ideas came to fruition in America, as Williams, though a Puritan, collided with John Winthrop’s vision of his “City upon a Hill.”

Acclaimed historian John M. Barry explores the development of these fundamental ideas through the story of the man who was the first to link religious freedom to individual liberty, and who created in America the first government and society on earth informed by those beliefs. The story is essential to the continuing debate over how we define the role of religion and political power in modern American life.

I haven’t really read much about Williams since my school days, so that should be interesting. As for John Gray, whose book I’m already half-finished with and enjoying as usual, I thought this interview with Nick Talbot was one of the better ones I’ve seen of his, with Talbot’s questions actually adding to the quality:

I was surprised to see you so often characterised as a conservative thinker – you certainly don’t hold any positions that characterise, say, the “paleo-conservative” American right. (You have identified strains of utopianism in free market neo-liberalism and liberal interventionism and your embrace of James Lovelock’s Gaia theory is anathema to most on the right.) Is your conservatism more in the mould of David Hume, perhaps? A sceptical caution over the human tendency to see patterns where there are none.

JG: I’m not sure it makes much sense to talk of conservatism these days. Certainly I share the view, often held by conservatives in the past, that there is such a thing as human nature, that it’s relatively constant and in some ways inherently flawed. (Thinking this way is one reason why I’m not a post-modernist.) It was this type of conservatism that the painter Francis Bacon had in mind when he said he always voted for the right because it made the best of a bad job. The poet T.E. Hulme said something very similar. But that kind of conservatism scarcely exists any more: Today conservative thinking oscillates between neo-con progressivism – a species of inverted Marxism – and paleo-conservative reaction, which amounts to not much more than a collection of ugly prejudices (racism, homophobia, misogyny). Both these versions of “conservatism” seem to me hostile to the conservation of civilised life. The genuine scepticism of David Hume is much preferable to anything that passes as conservative today.

At the same time I doubt if Hume’s rationalistic Enlightenment variety of scepticism is enough – for one thing, he had the good fortune to live before the age of militant political faiths and modern fundamentalism. Montaigne is a better guide, possibly the best, to living in a time of modern wars of faith.

…You argue that popular music’s trite language of self-realisation owes much to the Romantic movement’s emphasis on originality, but I see it as a logical result of the culture of individualism perpetuated by the New Right; instead of thinking how they can contribute to their community, young people have been encouraged to indulge egoistic fantasies. Is there any hope for encouraging a communitarian ethos in young people?

JG: I wonder if communitarianism means anything any more – think of Cameron’s big society. The prevailing individualism runs much deeper than anything owed to the New Right. Maybe we’re in a time akin to those in which the Buddha and Epicurus lived – in which it’s up to each individual, along with those they care about, to live as well as they can. To be sure, political and other types of collective action may be necessary to defend civilised values. But I don’t think any collective project can or should be viewed as providing meaning in life.

« Mind-Monkey in the Middle» Felonious Bunk