June 21, 2013 By Damian in calvin and hobbes, solitude, writing No Comments 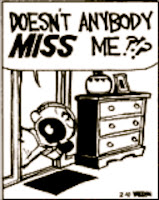 Apart from the obvious — i.e., there’s always death and the possibility of posthumous resurrection — my wise friend might also be right that a person might need a certain amount of celebrity in order to be known for having disappeared. And to my discredit, deep down, I admit this is pretty attractive. I want to retreat from the world and think and write in solitude. At the same time I wouldn’t mind a few readers knowing I’m out here being all mysterious.

Orner? Wait, didn’t he kick for the Vikings? No, no I’m talking about the writer, you know the dude that vanished…

A genuine recluse, of course, wouldn’t give a damn.

Yeah, genuine reclusiveness never looks back over its shoulder. John Lennon said life is what happens to you while you’re making other plans; well, reclusiveness is what happens when you’re too absorbed in your life’s work to look up and take notice of the reaction it’s getting from others.

Then again, Mr. Magoo might be a recluse by this definition.

The point is this! — all you can do is give yourself completely to your writing, and whatever happens, happens. Liu Xiaobo’s wife had the right of it: are you truly incompatible enough to be invisible, or are you simply being coy and playing hard-to-get in the hope of greater reward? The online world especially, lending itself so readily to pantomime performance in lieu of substance, is full of people who want to loudly and visibly separate themselves from the group while being recognized and praised by the group for their independence. I would think such conflicted coquettishness would only detract from a serious writing practice.