Crows Are Pulling at My Clothes, The Wind Got My Fingers Froze 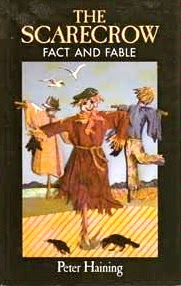 Its symbolism is universal, but the original scarecrows were nothing like the now familiar straw-stuffed icon of Halloween. Scarecrows, sometimes bearing an animal skull or rotting produce, were placed in fields in the spring and were burned after the Autumn harvest in celebration, their ashes returning nutrients of potassium and nitrogen to the soil. In Great Britain they are known as hodmedods, murmets and Hay-man, Tattie bogle or bodach-rocais (old man of the rooks). To the Bengali’s it’s a kaktadua. A straska to the Czech’s. The Russians, a pugalo, just to name a few.

A definitive history of the scarecrow has never been penned. What is known is that among the first field “gods” were Japanese “kakashi”, a deity of knowledge and agriculture such as Kuebiko who is unable walk and therefore simply stands in the fields. American folk art historians say scarecrows are in a class known as “ephemerals” in that they don’t last long. Snowmen and harvest figures are also counted among the ranks of ephemerals.

My P.R. agent informs me that you humanoids the “masses” like it when larger-than-life figures such as myself descend from the Olympian heights long enough to reveal some trivial “humanizing” details of our irrelevant personal lives to make us seem more approachable and humble, even though I personally would release the hounds upon any of you who actually got within 500 yards of me. So, with that in mind, here’s one of those touchy-feely little factoids for you to treasure: I collect ornamental scarecrows.

By birth, temperament and aesthetic inclination, I’ve always been a child of the autumn. It’s when I feel most vibrantly alive. And so, for reasons I only dimly understand and could never really articulate, I’ve always been attracted to symbolic images of anything autumn-related. The first scarecrow I got was a ceramic Hallmark figurine, as a gift one October. Around that very same time, I discovered Peter Haining’s book, the cover of which you see above, in a second-hand bookstore downtown. Oh, how I love that book. I’ve reread it dozens of times over the years.

From that point on, I visited arts and crafts stores, florist shops, curio shops and roadside apple butter festivals to collect any interesting and unusual scarecrows I could find. I even pilfered one from a hotel’s front desk one year, such is the depth of my passion. Well, come on, I obviously appreciated it far more than they would have. I liberated him, is how I prefer to look at it. Anyway, I collected around a hundred before it became hard to find any unique types I didn’t already have. (Yes, I suppose that makes me a bit of a scarecrow hipster — they were cool before they became, like, all mass-produced and uniform. I only collect extremely creative ones now. You probably haven’t seen any like them in your big-box crafts store.) They range in size from three feet tall to one inch. I have them scattered in various places around the house, mostly on the screened-in back porch, but I hope to one day have an area constructed especially for them.

I’m always delighted to find references to them in movies, novels or any other facet of pop culture. Two songs in particular that I like which make poetic use of the image are Ministry’s “Scarecrow”, which imagines Jesus himself as the original man of straw, and Beck’s song of the same name, in which the broken, forlorn narrator, after a failed relationship, finds himself “Standing all day keeping watch/over all the treasures we lost.” (Beck also refers, in a different song, to the “scarecrow shadow of the Nazarene”.)