Flying Down to Rio, Going to Brazil

June 12, 2014 By Damian in omnigatherum, world football No Comments 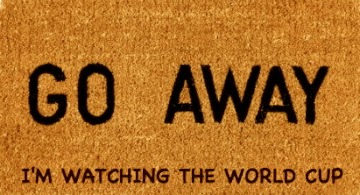 This might be a good time for you to take that summer vacation you were planning! I don’t plan on taking the whole next month off or anything, but I imagine I’ll be posting less than usual, especially during the first couple weeks of the tournament. I may continue to update this post with links to things I find interesting, especially if I lack the time or inclination to add much of my own thoughts to them. So you might want to keep checking this space, is what I’m saying.

• ABB — Anybody But Brazil. Yeah, what Leon Krauze says. The entitled arrogance is galling enough, but after watching them cheat their way past a mediocre Croatia in the opening game, I want to see these bastards crash and burn in the worst way.

• The same ignoramus who said last year that postmodernism is just another term for “critical thinking” or “questioning your assumptions” (identical to doing “good science”, even) is saying it again, blithely dismissing the actual people and concepts that have defined the field over the last few decades as irrelevant to his purposes (by contrast, here’s an actual scientist with a useful summary; scroll down to book page 43 and start reading from the paragraph that starts with “All movements tend to extremes…”). Rather beggars belief, doesn’t it, that the term existed without any form or substance for so long until some cow-college biology professor-slash-Humpty Dumpty linguist picked up a comic book guide to pomo philosophy, whereupon he could tell everyone what they’d been missing all these years. By his vague and useless definition, everyone from behavioral economists to Zen Buddhists can call themselves postmodernists (or good scientists). Christ, what a fucking moron.

• As always, bad things are directly caused by other people enjoying art and entertainment that I find offensive. Bring back the PMRC!

• Jason Walsh on the self-defeating pointlessness of whatever is currently calling itself “leftism”.

• Carl Wilson published an excellent little book examining notions of taste, snobbery, class and signaling, using Céline Dion as his focal point. I read it a couple years ago and liked it. Now Evan Kindley has written an essay about the book and its themes. I read it just now and liked it.

« You Say You Got a Real Solution, Well, You Know…» All Them Books I Didn’t Read, They Just Sat There on My Shelf Looking Much Smarter Than Me (XIII)