What a Bellend We Have In Peezus

As longtime readers know, I have always been uncomfortable with the progressive enthusiasm for silencing and marginalizing dissenters and opponents. In a neoliberal age, of course, we’re happy to let market forces do our censoring for us, because, hey, it’s only a problem if it’s the government trying to shut you up. At any rate, the point here is not to rehash that debate, just to note a different flaw in my argument: in order to convince people to adopt a more generous spirit of free speech, one would have to appeal to people who actually cared about principles, who aimed for consistency, who felt troubled by looking like the most brazen hypocrites. But you can’t shame the shameless:

Ethical journalism is not about silencing people who disagree with you — this is a censorship campaign, pure and simple. We can see through your mask…and boy, do you make it easy.

It’s not fair when our tribal opponents use the advertiser boycott to their advantage and succeed at it! Only we righteous ones get to do that! This man has all the intellectual conviction of a windsock. 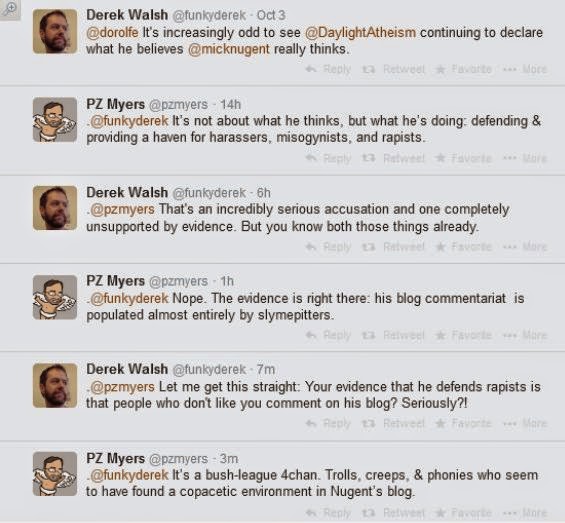 “Those people are a bunch of rapists.”

You know, if I honestly believed that sexual assault and rape were nearly-invisible epidemics, I would be furious at seeing imbeciles like this frivolously throwing the word “rapist” around as a loose synonym for “people I dislike”. If I found myself doing this in a moment of madness, I would be aghast at the thought that I might be undermining a cause I care deeply about through my selfish stupidity. But it would be prematurely cynical, in my view, to suggest that this proves that Peezus doesn’t actually believe his own bullshit, let alone care about it. I think he does care about what he imagines is a widespread social wrong. I think he’s just too stupid to realize he’s not helping.

« Everyone Wants to Be a Perpetual Motion Machine. We All Try Harder as the Days Run Out» While I’m Still Standing You Just Fade Away