June 17, 2015 By Damian in books, foolosophy, santutthi No Comments

Some air-conditioning systems are set at 70 degrees Fahrenheit. Others are set at 20 degrees. Human happiness conditioning systems also differ from person to person. On a scale from one to ten, some people are born with a cheerful biochemical system that allows their moods to swing between levels six and ten, stabilizing with time at eight. Such a person is quite happy even if she lives in an alienating big city, loses all her money in a stock-exchange crash, and is diagnosed with diabetes. Other people are cursed with a gloomy biochemistry that swings between three and seven and stabilizes at five. Such an unhappy person remains depressed even if she enjoys the support of a tight-knit community, wins millions in the lottery and is as healthy as an Olympic athlete.

…If we accept the biological approach to happiness, then history turns out to be of minor importance, since most historical events have had no impact on our biochemistry. History can change the external stimuli that cause serotonin to be secreted, yet it does not change the resulting serotonin levels, and hence it cannot make people happier.

Compare a medieval French peasant to a modern Parisian banker. The peasant lived in an unheated mud hut overlooking the local pigsty, while the banker goes home to a splendid penthouse with all the latest technological gadgets and a view to the Champs-Elysées. Intuitively, we would expect the banker to be much happier than the peasant. However, mud huts, penthouses and the Champs-Elysées don’t really determine our mood. Serotonin does. When the medieval peasant completed the construction of his mud hut, his brain neurons secreted serotonin, bringing it up to level X. When in 2014 the banker made the last payment on his wonderful penthouse, brain neurons secreted a similar amount of serotonin, bringing it up to a similar level X. It makes no difference to the brain that the penthouse is far more comfortable than the mud hut. The only thing that matters is that at present the level of serotonin is X. Consequently the banker would not be one iota happier than his great-great-great grandfather, the poor medieval peasant.

This is true not only of private lives but also of great collective events. Take, for example, the French Revolution. The revolutionaries were busy: they executed the king, gave lands to the peasants, declared the rights of man, abolished noble privileges, and waged war against the whole of Europe. Yet none of that changed French biochemistry. Consequently, despite all the political, social, ideological and economic upheavals brought about by the revolution, its impact on French happiness was small. Those who won a cheerful biochemistry in the genetic lottery were just as happy before the revolution as after. Those with a gloomy biochemistry complained about Robespierre and Napoleon with the same bitterness with which they earlier complained about Louis XVI and Marie Antoinette…People think that this political revolution or that social reform will make them happy, but their biochemistry tricks them time and again.

I think he overstates the case a bit. I share Alan Jacobs’ suspicion of our ability to abolish sadness without changing the conditions which make us sad to begin with. Aside from that, though, this does a good job metaphorically of articulating an existential truth: the objects of our feelings may change, but the subjective feelings themselves stay within the bounded range of our set point. Our living conditions may change in quantifiable ways, but our emotional reactions to those conditions do not likewise increase or decrease exponentially. The happiness we felt as children with a new toy is not measurably smaller or more fleeting than the happiness we feel as adults when the bills are paid and it’s a beautiful autumn day to share with your beloved spouse. A toy may be qualitatively inferior to a loving relationship, yes, but the happiness itself is a product of your circumstances and expectations. I would feel a surge of joy today if the book I was just talking about in the previous post were to suddenly become available at my local library, but my joy would not be diminished by the fact that there are a number of other, more fundamental ways in which my life could be markedly improved. Moreover, that surge of joy would not be layered on top of all the previous surges of joy I experienced upon getting hold of other books I had looked forward to reading. Those all faded shortly after attaining the object of my desire, just as this one will. Your brain cannot stay saturated in serotonin, or, if you prefer a less reductionist formulation, you cannot remain indefinitely in a manic, ecstatic state. Contentment is not cumulative.

Reading Joseph Epstein’s appreciation of Michael Oakeshott a couple weeks ago reminded me of one of my favorite pieces of Oakeshott’s writing, from his essay “On Being Conservative”: 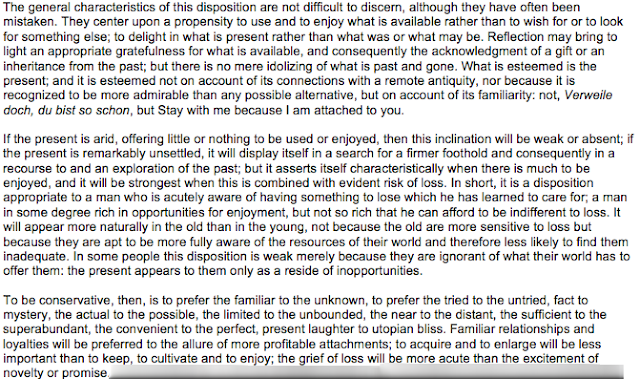 He is describing conservatism as a disposition here, rather than a political program. In addition to that heterodoxy, you notice how he emphasizes that resistance to change, rather than being necessarily and merely a fear and hatred of “progress”, can represent a loving acceptance of what is, in all its imperfection. It’s almost more of a mystical viewpoint than a political one, where the aim is to have a sense of gratitude for everything life brings, to appreciate things without wishing they were something else. What he calls a conservative disposition is the perspective of a well-adjusted individual who realizes that more will never be enough, that perfection is unattainable, that the future will feel no different from the present when it arrives, that if you can’t be happy with what you have right now, you likely never will be. A conservative disposition, by this reckoning, is one which recognizes the folly of expecting changing circumstances to shift one’s HHC set point.

« The Things You Think Are Useless I Can’t Understand» If All You Have Is Critical Theory, Everything Looks Like Subtext