Confessions of a Born-Again Pagan

January 12, 2017 By Damian in books, philosophy No Comments

A couple of years ago, I wrote to Anthony Kronman to tell him how much I loved his 2007 book, Education’s End. I immediately received an auto-response informing me that he was on summer vacation and wouldn’t be checking his mail regularly. Having done my part to contribute some positive currency to the author-reader economy, I assumed that was the end of that and went merrily upon my way. To my great surprise, he wrote back the very next day with a warm, grateful letter of his own thanking me for taking the time to write, saying that writing a book like his was akin to throwing a bottle with a message into the sea; there’s no telling who will pick it up and how it will be received, but it’s always gratifying to hear that someone did find it, especially when the message serves its purpose. 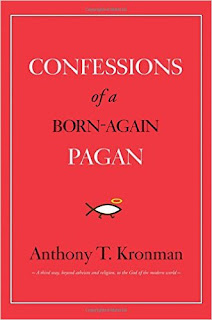 Having gotten a bit of positive attention from an important author, you could say that I was already predisposed to be a gushing fanboy. But even so, by any measure I can think of, his new book, Confessions of a Born-Again Pagan, is a masterpiece. An 1100-page book about philosophy and theology that reads at times like a thriller! Patient without being plodding, thorough without being tedious, and the major points and themes were helpfully reiterated for maximum clarity without being repetitive.

It would be impossible to give this book a capsule summary that could possibly do it justice. I will just say that this is exactly the sort of non-academic philosophy I have loved to read all my adult life. This is what I always imagined the “history of ideas” to be about ever since I heard there was such a discipline. It was as engrossing as when I first discovered Isaiah Berlin’s lectures and books, a similar experience of rapt enjoyment at hearing a masterful narrative laid out in such a clear and informative fashion. I particularly enjoyed the sections about the Catholic reactionaries for reasons I couldn’t even articulate. Perhaps because they were relatively unfamiliar to me, or because their criticisms of liberal society’s weaknesses were so trenchant and worth further attention? Whatever the case, the fact that Kronman presented their arguments so well as to be gripping is, I think, a testament to his narrative skill.

It reminded me somewhat of Yuval Levin’s excellent Tyranny of Reason, a similar tour through the disenchantment of the West with much of the same cast of characters, though placed within a narrower narrative framework. Peter Watson’s The Age of Atheists, subtitled How We Have Sought to Live Since the Death of God, ended with Watson suggesting a renewed appreciation for phenomenology as an intellectual corrective to nihilistic disenchantment, which, at least in his telling, bears somewhat of a family resemblance to Kronman’s born-again paganism. But most of all, I felt I had already been made receptive to Kronman’s theme by my long exposure to the writings of Alan Watts. He often addressed similar themes within a mythological framework — he talked about the alienation inherent in the Western conception of the world as something “made” by a separate creator in the same way that a bowl is crafted by a potter, rather than seeing it as an organic process of growth in which, for example, the Earth “peoples” in the same way that an apple tree “apples”. He also used Indian mythology to illustrate the self-defeating tendency of our insatiable lust for total control and autonomy by suggesting that if you were an omnipotent god in control of absolutely everything, what would you want most of all? A surprise. And what would be the most thrilling surprise? To “forget” that you were god and enjoy having adventures as all these infinite separate little conscious beings. And then one day, you “wake up,” remember that you were always one indivisible totality, and start the whole process over again.

There’s a saying I love, most often misattributed to André Gide: “Everything that needs to be said has already been said. But since no one was listening, everything must be said again.” I occasionally hear people I enjoy and respect talk about their aspiration (or achievement) to restrict themselves to reading books written before some arbitrary date, on the assumption that most of what’s “new” is frivolous chatter that will be quickly forgotten. While I often agree with the sentiment, it’s painful to imagine missing the chance to read a book like this just because of a snobbish disdain for the publication date. There are treasures to be found in any age, even if they are, in a sense, saying it all again. Maybe a few more people will be listening this time.

« Sic Transit Gloria» Nothing Is Good Enough for People Like You