The Terror of Existence 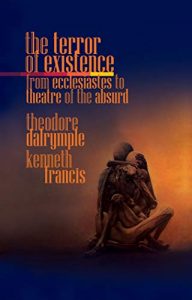 I had such high hopes for this book. It was billed as “part literary criticism, part philosophical exploration,” a dialogue between a believer, Kenneth Francis, and a skeptic, Theodore Dalrymple, over the search for meaning following the cultural death of God. I envisioned a skillful rhetorical fencing match. I imagined a graceful intellectual tango. What I witnessed was a blindfolded, three-legged sack race.

As a cheerful, Epicurean-style skeptic, I’m always open to the possibility that someone might offer a new way of thinking about the big questions. I’m pretty sure I’ve heard most of the religious arguments, but who knows, more things in heaven and earth and all that, maybe I can still be surprised yet. Instead, Francis’s contributions are the epitome of predictability. He makes one reference in passing to the supposedly-sophisticated arguments being put forth by modern theologians, but he himself is content to rely heavily on what I like to think of as the Dostoevsky fallacy — “without God, everything is permitted” — which he obligingly quotes early on. Any critical caltrops you might think to scatter across his path, such as the fact that the worst of human nature was in clear evidence long before God’s existence was seriously questioned by the French philosophes, or the fact that billions of people have found ways to develop culture and live meaningful lives separate from the axioms of Christianity, would be useless against the rhetorical steamroller Francis is driving. In essay after essay, to paraphrase Matthew 12:30, you’re either with Jesus or you’re with Pol Pot. I’ve seen fingerpaintings with more delicate brushstrokes than this.

The book is structured as alternating essays, with each author addressing different books and plays. Waiting for Godot is the only work to receive attention from both, with a brief three-paragraph “conversation” between them following. Admittedly, I got the book because of Dalrymple’s name on it; I didn’t know or care anything about Francis beforehand (and I certainly don’t care to know anything else afterward). Dalrymple’s contributions are interesting, as usual, though I tend to think of his New English Review Press publications as generally being his second-string essays (and, as is typical of an NERP book, typographical errors abound, which is mildly annoying). But the contrast between the two authors’ efforts side-by-side is like listening to chamber music punctuated by a kazoo and penny whistle. Francis’s essays aren’t just bad, they’re comically bad.  It’s as if a WorldNetDaily column mated with a YouTube comment thread. The non-sequiturs and overall lack of subtlety and nuance attain a perverse sublimity as he free-associates about how the pebble of Holden Caulfield is responsible for the rockslide of post-’60s decadent hedonism. Oh, you think I’m exaggerating.

I have often wondered whether the American novel, The Catcher in the Rye, is a literary hoax, a kind of Leftist propaganda manifesto manufactured to discredit traditional family values. And is it not coincidental that the Leftist generations after its post-1950s publication, were generally disaffected, drug-addled American youth who had become spiritually poisoned during the sexual revolution by a Godless culture culminating decades later in glorifying a toxic entertainment industry with vile lyrics and vulgar role models?

…Isn’t it strange that Salinger, who wrote this frequently censored, anti-family, blasphemous, rebellious, violent, promiscuous, pro-smoking/drinking/lying book became a recluse? Was the cliff in the rye field an imaginary threat, where ‘little children’ must be protected by their Big Brother? A generation of brainwashed sheep kept in line by a ‘good’ shepherd? Or is the story an autobiographical psychological projection of Salinger’s world view? Was he a Marxist? Perhaps we’ll never know.

Sometimes comment would be superfluous, and all that’s left to do is back away slowly.

But since we find ourselves in this rabbit hole of conspiratorial thinking, perhaps we should ask: is this book intended as covert atheist propaganda? Did some godless sodomite set this caricature up to discredit the very idea of intelligent religious thought? Is Dalrymple being blackmailed to lend his name to this atrocious effort? Perhaps we’ll never know.