We Had a Close Call. Then Another One.

We had a close call
I didn’t even see it, then another one
I hardly believed it at all
— Band of Horses, “The General Specific” 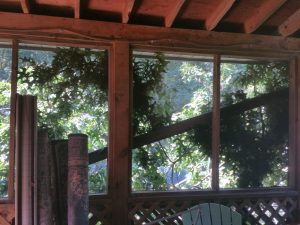 So, yes, I was working in the garage yesterday morning when I heard such a clatter, as if a garbage truck had picked up a dumpster and dashed it against the ground in a fit of rage. Running back into the house, I met the Lady of the House coming from the opposite direction. We converged at the door to the back porch, where we saw that one of our oaken neighbors had dropped in for a visit.

We had just had solar panels installed earlier this week, and for a confused second, I thought that somehow they had come loose and gone sliding off the roof. But no, the crash I heard was the tree destroying our above-ground swimming pool. The people who built the house had installed it; it was a really nice one, with a deck custom-built around it (pretty similar to this one.) Incredibly, the deck itself was unscathed. A section of the gutter was torn off (you can see it pinned to the screen in the picture), but it just so happened to be the section that we were going to repair soon anyway. The branches fell inches short of the roof; not a single shingle was damaged. The solar panels were safe, thank goodness. It missed the propane tank by a few feet, thank goodness once more (with feeling this time!). And the pool needed some minor repairs to the plumbing, so we hadn’t even opened it this season anyway. Insurance should cover replacement value, though honestly, we probably won’t bother to replace it. A check for several thousand dollars can be far more useful in other ways than replacing a luxury item that only gets used three or four months a year anyway. All in all, we couldn’t have possibly planned it any better had we tried.

Last year, our car got totaled when a high-school girl, late for her prom pictures, tried to dart across the highway in front of us from a side road and didn’t time it well enough. We clipped her rear end and sent her into a spin, where the truck coming up in the left lane got her on the opposite front end and pushed her into the grassy median. She was shaken up, but no one was hurt. As it happened, we were looking at the possibility of some expensive engine work on that car, but the insurance payout covered everything we owed plus another thousand or so toward a new vehicle (which we bought outright). Now, as someone who has logged over a million miles in nearly thirty years of various driving/delivery careers, I despise stupid, inattentive drivers. I’ve seen countless accidents and damn-near accidents, especially on interstates, and have probably spent a week of my life, if you total up the hours, being stuck in traffic behind an accident or detouring around it. As I’ve said before, bring on the driverless cars. People are too unforgivably stupid to be trusted with them. So, as you can imagine, I was furious at the time. We could easily have been killed by some hormone-addled, airhead teenager, the avatar of all the dangerous morons I’d seen over the years tailgating people at eighty miles per hour while fiddlydicking with their stupid phones. But once I’d calmed down, I had to admit: this was clearly the best possible outcome, all things considered. We couldn’t have possibly planned it any better had we tried.

It’s a strange feeling to be grateful for disasters. It feels a bit like making cutesy noises at a wild animal that could easily decide to maul you. These near-misses turned out to be quite beneficial, but intellectually assenting to that fact calls one’s attention to the uncomfortable reminder that very little of one’s life is actually under one’s control. I’m not a religious believer, but I’m still sensitive to when a situation calls for the humble recognition of how lucky we are to have as much good fortune as we do. No amount of human brilliance or technological mastery will ever completely remove fate’s teeth and claws. For every person who happily burbles about what a blessing in disguise a disaster turned out to be, there are countless more in silent graves who couldn’t be reached for comment. Maybe one day we won’t be so fortunate anymore ourselves. All we can do is be aware, feel small, and move on — perhaps a bit more tentatively at first, but eventually, as we always do, slipping back into complacency and self-centeredness.