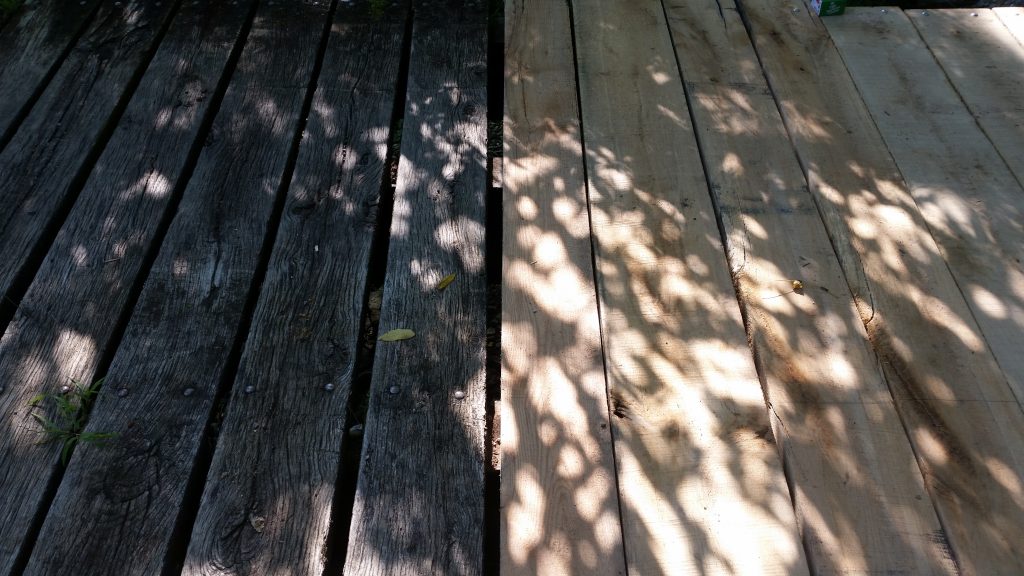 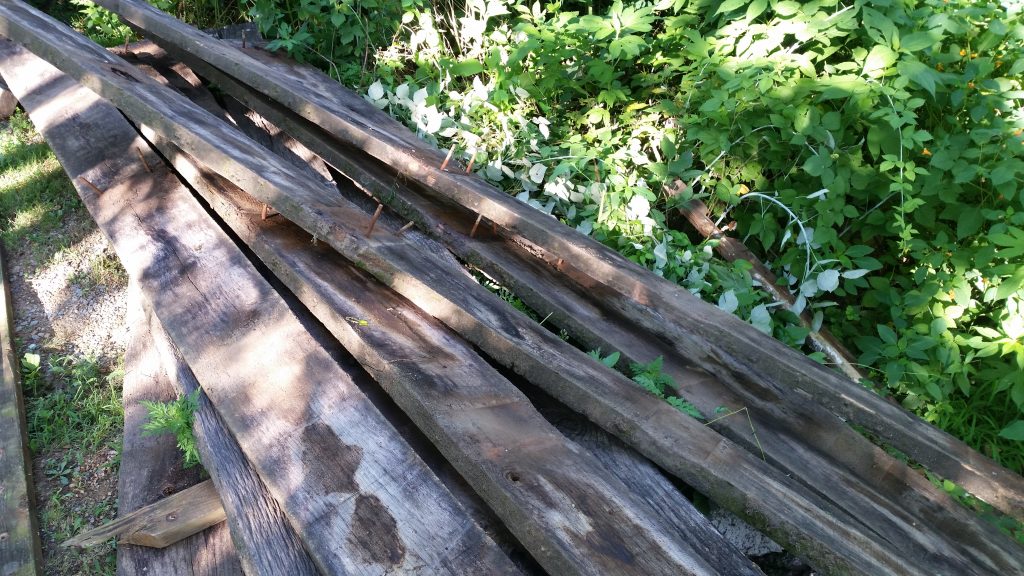 We’re replacing the planks in our bridge. Philosophers can debate the paradox of whether it can be said to be the same bridge now. I just think it’s funny, the things to which memory attaches itself. For a moment, I reflected on the fact that these planks predate my arrival here. Everyone who has ever arrived here has crossed them — long-time residents, one-time visitors, and others in between, some forgotten, some dead. There’s some kind of compelling significance about physical reminders of an increasingly distant past.

Yesterday, I took an old t-shirt out of the closet to wear while working. It has holes in it, it’s rather shapeless, and it’s a generic sort of heather/beige color. Nothing striking about it at a glance. For a moment, I wondered why I still have it, and how it had survived the occasional purges of old clothing. I remembered, as I always do when I think about it, that I had been wearing it when one of my dogs had been put to sleep. For some reason, that’s one of the details of that day that stand out vividly in memory. I also recalled that I still have the hat and overshirt I was wearing, both very well-worn. The pants and hiking boots which completed that day’s ensemble are long gone. I don’t remember getting rid of them. Did I pause for a mournful moment’s reflection before doing so? I don’t remember that either. Why should I feel slightly more sentimental about the upper-wear anyway? What does holding on to it accomplish? There’s no rational explanation for it, of course. Le cœur a ses raisons que la raison ne connaît point.

In his wonderful book of brief meditations on memory and forgetting, A Primer for Forgetting: Getting Past the Past, Lewis Hyde writes in reference to Proust:

More striking still is the scene in which Marcel, revisiting the seaside resort of Balbec, bends to unbutton his boots and suddenly recalls the time when his grandmother had helped him with that simple task. With that memory, he finally knows fully that his grandmother has died, and he weeps.

Such are the “nows” that pass. Odette’s love has passed, Gilberte’s love has passed, his grandmother’s life has passed. The forgetting that has held each of these facts at bay might best be described as a species of dissociative amnesia. “That didn’t happen!” the mind declares, walling itself off from the painful real, refusing its proper burial. But then an apparently trivial trigger—a snatch of music, an overheard remark, a simple gesture—eludes the guardian amnesia, and of a sudden comes the understanding that the “now” of the past has truly passed, the memory recovered from the far side of oblivion revealing the self to be contingent, mortal, a creature of time.

It’s foolish, of course, to be overly tenacious in holding tight to the past. Even if we were able to successfully pull the brakes on the passage of time, the world of stasis that would result would be just another form of death. And yet, we can’t simply lie back like a branch on a stream and calmly surrender to the flux of time either, without seeming to dissolve something essential to our humanity. As Sam Hamill wrote in his poem “A Rose for Solitude,” we still need to reach for people, places and experiences as they flow past, to hold them for a moment, to look them in the eye, to recognize the significance of the fact that, however briefly, we met, and it mattered.

And if, as I pass,
I should look you in the eye,
do not be afraid. I want
only to glimpse the emptiness
at the center of your heart,
I want to reach for you
because I know,
as you do,
we might never have met.

« Thursday Throwback» The Loneliness of the Long-Distance Content Creator