November 21, 2019 By Damian in thursday throwback No Comments 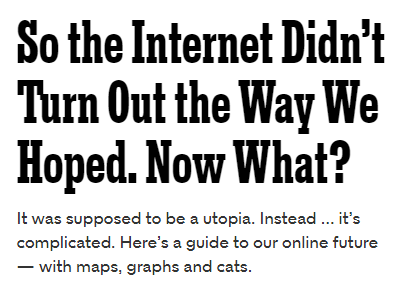 [And with that prompt, here’s this week’s Thursday Throwback, originally published Apr. 26, 2013]:

Watching the world around me change its ugly faces
Yes, this is mankind

To be sure, the power of crowdsourcing has given us gifts both precious (like Wikipedia) and picayune (the cover design of Elizabeth Gilbert’s next book), but it is a legitimate achievement of the digital age, one that proves that the internet is capable of transforming the way we interact collectively. Prior to vilifying Tripathi, for example, Reddit users had been helpfully sifting for leads amid the enormous amount of footage taken at the Boston Marathon. Nevertheless, the reflexivity with which we invoke the “wisdom of crowds” seems to suggest less that we think crowds are truly wise and more that we understand — if only dimly — their undeniable potency. The fact is that the digital age has yet to really countenance the cultural anxieties produced by the new invisible crowd.

In this regard, the jitters of the internet era bear an almost comic resemblance to a central disquietude of the august, and apparently closed, epoch we call modernity. For just as the increasing institutionalization and regulation of the internet seem to be attended by the lurking possibility that everything could crumble from one cyber attack unleashed by a handful of anonymous malcontents, so too did the project of modernity grapple with the contradiction that even as its liberal institutions grew more powerful, its stability became more dependent on the whims of the crowd. The French Revolution and its aftershocks are the textbook examples here, providing the archetypal images of the crowd in all its revolutionary splendor and violence. Now clearly, the works of Anonymous or 4chan don’t quite match the grisly proceedings of the Jacobins, but one can detect definite recursive qualities between them — namely excessive zeal, indiscriminateness, feverishness. And if history insists on recursion, there’s no reason not to learn from its lessons.

There’s little diversity and independence: Twitter and Facebook mostly show you people who are like you and things your social group is into. And social media is becoming ever more centralized: Facebook, Twitter, Tumblr, Medium, Pinterest, etc. instead of a decentralized network of independent blogs. In fact, the nature of social media is to be centralized, peer-dependent, and homogeneous because that’s how people naturally group themselves together. It’s a wonder the social media crowd ever gets anything right.

The dream of a new humanity dies hard. Formerly, the post-Enlightenment project to create one was understood as being political and cultural in nature. In the last couple decades, there’s been some half-hearted gestures in the direction of the old socialist ideals, but the focus mostly seems to have shifted to technology. The Internet and all its gadget offspring have given us one more sugar rush of belief in transformative potential, but it turns out that a bajillion monkeys still don’t produce Shakespearean-quality art even after you replace their typewriters with MacBook Pros. Perhaps we could say that our love affair with all things digital was a rebound relationship after our breakup with socialist utopianism, a torrid, escapist fantasy to avoid coming to terms with the limitations of our nature. Somewhere in the back of our mind, we knew that we weren’t seriously going to reinvent the human animal simply by the use of incredible new tools, but those winking screens and sleek designs were just too tempting, and besides, it was good for our self-esteem as we slowly processed what we’d lost.

It is something fun to wonder about, in my vague, uninformed way. Are we starting to bump up against the edge of our petri dish in more ways than one? If political, cultural and technological attempts to progressively alter human nature toward some nebulous betterment all fail, what then? Will we retreat into some kind of mystical inwardness, experiencing life on a level plateau instead of a sharp incline, realizing that wherever we went, there we were?

« What? You Wanna See If I Got the Minerals?» I Am Just a Poor Boy and My Story’s Seldom Told