What a Strange Game. The Only Winning Move Is Not to Play.

February 16, 2020 By Damian in notorious jbp, socmed, the madness of crowds, tribalism No Comments

On that note, two recent articles I noticed but refused to click on: 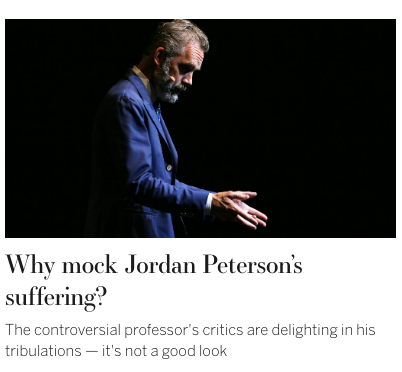 From a video that his daughter posted, I already knew that Peterson’s wife had been diagnosed with terminal cancer, and that the medications he was taking for his depression had caused him to suffer through physical dependence and withdrawal. What point is there in an article that adds nothing to this sad story but disgust at the spectacle of people behaving horribly on social media in reaction to it? If a writer simply wanted to express sympathy for Peterson, it would have been fairly easy to do. But that would lack spice. It wouldn’t have the necessary frisson of righteous anger. For that, we need to add, “And look at all these horrible people gloating over his suffering. Look at this tasteless comment in particular. Remember, these people are on the Other Side. That’s the sort of degenerate character they have over there.” That’s what gets the clicks, and that’s what guarantees a steady supply of more of the same. Rush Limbaugh’s recent lung cancer diagnosis brought more of the same gloating, which was amplified and magnified even more by people who were appalled by it. It’s ironic to see people on social media worrying about the slim possibility of contracting coronavirus while not thinking twice before passing along intellectual bacteria like this. Another, even better, irony is that if social media were to be “saved,” it would have to find a way to incentivize not antisocial but asocial behavior — people who couldn’t care less about site stats, follower counts, clicks, likes, and retweets. Writing for money, performing for attention — these are the livestock chutes which funnel the content-providing cattle toward the inevitable lowest common denominator.

« Kudos to Those Who See Through Sickness» Alt-Amazon