We Are the Thing of Shapes to Come

June 17, 2020 By Damian in race, revillaging, the cult of multi, the geist of the zeit, the great awokening, the madness of crowds 4 Comments

The imbeciles on Twitter are unserious people, but unserious people can produce serious problems. There is a word for the situation in which there is no room for disagreement. The word is not “justice.” It is “totalitarianism.” That is what cancel culture is, and we have seen it in highly developed form in such places as East Germany under Honecker and China under Mao and the Cultural Revolution.

A couple days later, Williamson linked to an interview with the high priestess of the state religion of anti-racism, Robin DiAngelo, in which she informed us:

Racism is the foundation of the society we are in. And to simply carry on with absolutely no active interruption of that system is to be complicit with it. And in that way, we can say that nice, white people who really aren’t doing anything other than being nice people are racist. We are complicit with that system. There is no neutral place.

Ah, yes, “Everything within the cause, nothing outside the cause, nothing against the cause,” as Mussolini might have said, had he been willing to interrogate his own whiteness. I’ll bet you that DiAngelo has one of those motivational office posters hanging up in her workspace emblazoned with O’Brien’s promise from 1984: “We shall squeeze you empty, and then we shall fill you with ourselves.” However, things aren’t as harsh as they seem. They’re at least willing to pay for our therapy and retraining: 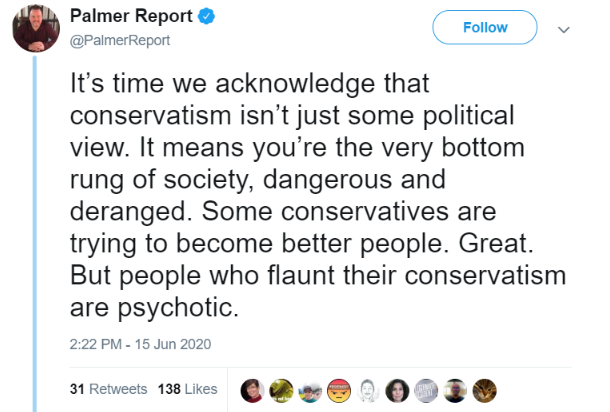 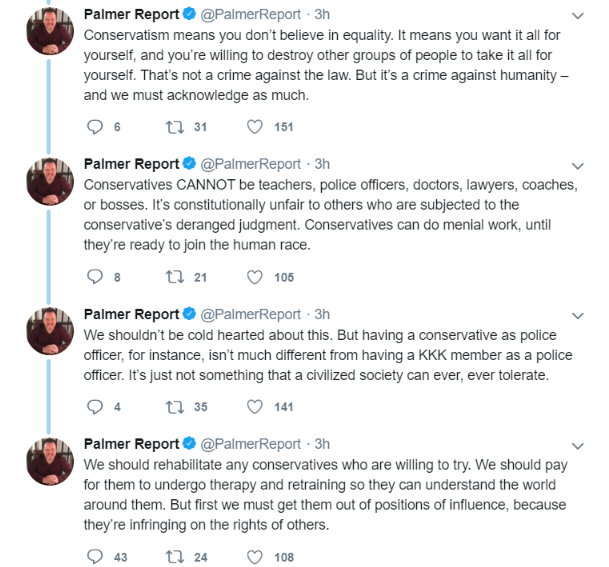 Look at it this way: this might be the only way we’re allowed to go to summer camp anytime soon. If any of you get assigned to my cabin, let’s start a clandestine reading group.

I had managed to make it this far in life without ever hearing of this carpet-chewing lunatic, which I take to be a healthy sign for both me and society in general. I think it’s noteworthy, however, that he has 331,000 followers. It gives slight pause to consider that the population of a fair-sized city could encounter a Streicher-like screed like this and say, “Now, there’s a fellow making good sense. I’d like to be kept abreast of all his further thoughts, please.” Signal? Noise? Who can tell anymore? Is this feverish sentiment a meaningless outlier, or an ominous harbinger?

It is a truth universally acknowledged that there is no such thing as a happy political junkie. I have never once encountered a person intimately familiar with everything from palace intrigue to policy minutiae who could be described as well-rounded, genial, or content. Political obsession invariably deforms its victims. They can’t change their minds and they won’t change the subject. A healthy person would be indulging in a hobby, or enjoying time spent with loved ones, not fantasizing about throwing political opponents in re-education camps, or preaching the good word of anti-racism to people who are inching the door closed in your face. The fanatic is convinced that his monomaniacal political awareness is the gravitational force keeping the world from falling apart. In reality, it’s more like a magnifying glass being used to burn a hole through the delicate bonds of “sympathy” as described by thinkers like Adam Smith, the fellow-feeling which makes life tolerable despite its countless imperfections.

Like Bartleby, I look at most of the activities that society offers me and offer a polite demurral. I would be happy to leave it at that, but apparently my attitude is increasingly unacceptable. I’m tired of being pursued by zealots who want to paw me with their dirty institutions and constrain me to belong to their desperate odd-fellow society. I will vote for whoever promises to build a wall between me and fanatics like DiAngelo and Palmer, a wall topped with razor wire and machine-gun turrets. We used to be able to depend on the much-more aesthetically-pleasing bulwark of manners, mores, civil society, or whatever else you want to call it, but the religious vacuum in society has been filled by politics-as-religion, so here we are.

« Interlude: Beats Antique, “The Lantern”» Call Me a Relic, Call Me What You Will