Carry Zeroes Over Till They Add Up

As millions of Americans escape home quarantine to the great outdoors this summer, they’ll venture into parks, campgrounds and forest lands that remain stubborn bastions of self-segregation.@devindwyer reports. https://t.co/Xzmouf4bwM pic.twitter.com/e8PckJcVqn

I don’t have any special prophetic powers, but I would suggest taking note of that term, “self-segregation.” It may sound like a weaponized strain of parody that escaped from a lab, but as the demand for racism continues to dramatically exceed the supply, I’d be willing to bet that we’ll soon be hearing a lot more of it in earnest. Anyway, I sure don’t want to be a racist hiker, so it sounds to me like the logical conclusion here is to round up some blacks, Hispanics and Asians, load them up with camping supplies, and march them off into the wilderness to decolonize the outdoors. Sorry, what? Well, no. Why would I ask them if they want to do it? Who cares what individuals want to do? The point is to make the demographics fit on this Procrustean bed of ours. Numbers! Numbers are what we care about, not subjective experience! 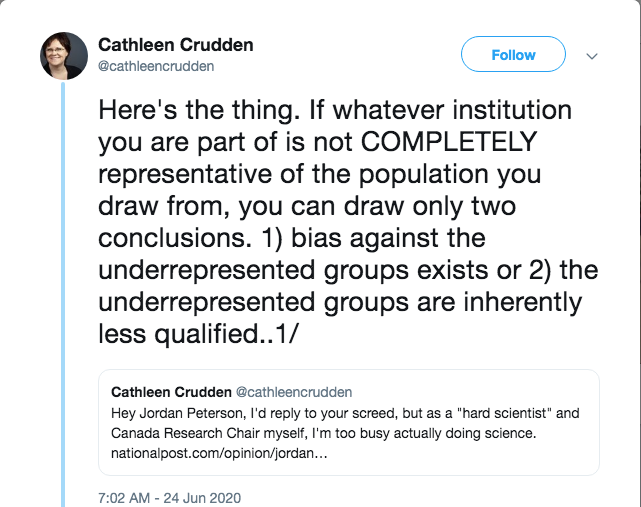 The great Thomas Sowell, whose books should be on every intelligent adult’s bedside table, just celebrated his 90th birthday on June 30th. If you’re unfamiliar with his work, and you’d like to hop on the bandwagon while he’s still around, and if you had to pick one book relevant to our current topic, I’d recommend Discrimination and Disparities, in which he labors heroically to dispel precisely this fallacy, that all disparities in outcome are the result of malicious discrimination. That thread, if tugged upon, really does unravel the whole progressive ball of yarn. We’ve all heard conservatives claim to be in favor of equality of opportunity, not equality of outcome. Progressives see this as a strawman, claiming that, if anything, they’re in favor of true equality of opportunity, which can’t exist as long as privilege, systemic discrimination, etc. exist. In practice, this amounts to being in favor of equality of outcome, because anything less is assumed to be illegitimate. Individual black people may claim to simply not be interested in hiking through national parks, but what if they’re only saying that because they’ve been imperfectly shaped by their history, both personal and collective? What would they choose if we could redo the past?

Is it fate?
Or is it just a cold heart?
Did I win the race?
Or was it just a false start?

— The Obsessed, “Touch of Everything“

Many of us can recall discussions of free will in philosophy class. We probably all discussed the possibility of what it means to “choose” under coercion. If  a criminal holds a gun to your head and commands you to do something appalling and/or illegal in order to save your life, is it truly a choice? Can you reasonably be faulted or blamed for not choosing death?

For progressives, history is that gun held to our heads. The circumstances into which we were born, the limitations placed upon us by genetics and upbringing, the imperfect choices we make with limited information throughout our lives — all of these infringements upon our ability to truly, freely choose from all possible options are seen as coercion. Like all virtues, liberalism can be taken too far and turned into a vice. It’s not enough to remove as many overt obstacles as possible in order to allow individuals as many options as possible; we have to imagine what the world would look like had none of those obstacles ever existed, and then work to realize that utopian vision here and now. Until all past injustices have been negated through enlightened policies, no one can ever be truly said to be free to choose. Had transatlantic slavery never existed, then…black Americans would constitute 13% of outdoors enthusiasts, in keeping with their proportion of the general population. Something like that. I know, I know, there are so many fallacious assumptions and counterfactual fantasies at work here that it doesn’t even bear taking seriously. Crudden’s one tweet could spawn a thousand questions attempting in vain to clarify all its implications. But while you may not be interested in philosophical incoherence, this virulent strain of philosophical incoherence is very interested in you and the many ways you’re oppressing people simply by existing.

Speaking of Jordan Peterson, as Ms. “Hard Scientist” was earlier, he wondered about an interesting question some time ago: What is the limiting principle of the left? We all have a clear idea of what it looks like when the far-right goes too far, but why have their mirror images on the left failed to equally serve as cautionary tales? Why isn’t it a cliché on the right to say that “real fascism has never been tried,” the way it is among apologists for communism? With the events of the past month fresh in my mind, my provisional answer to his question would be “disaster.” Disaster is the limiting principle of the left. Nothing else ever stops them from pushing in the direction of what they imagine to be “progress.” No matter how many times their ideas lead to the same predictable blood-soaked cul-de-sacs, they will only rest, regroup, and try again. The best we can hope for is that most of those ideas die before reaching adulthood. I fear that “disparities=discrimination”  has already become an obnoxious adolescent, though.

« Interlude: Sharon Van Etten, “Beaten Down”» This Is an Ideal Country