The Revolt of the Public

February 6, 2021 By Damian in books, media/propaganda, technology, the geist of the zeit, waiting for the barbarians 4 Comments 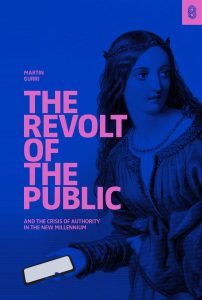 Like a python with a bellyful of pig, I’m going to be digesting Martin Gurri’s book The Revolt of The Public and the Crisis of Authority in the New Millennium for a very long time. This is one of those books I loved so much I almost feel wary of it now — isn’t it suspicious to find oneself in such overwhelming agreement with an author? Has he really presented such a useful and accurate perspective on world events, or am I just abandoning myself to the debauchery of confirmation bias? Whatever the case, it’s always a delight to find that someone else thinks the same thoughts I think, only better and more clearly.

First published in 2014, this edition added an updated chapter from 2018 which considers Trump and Brexit. I only wish there could be another update analyzing last year’s virus and woke riots in relation to his thesis as well, but I suppose I’ll have to check his blog for that. Speaking of which, he writes:

My thesis, again, is a simple one. The information technologies of the twenty-first century have enabled the public, composed of amateurs, people from nowhere, to break the power of the political hierarchies of the industrial age. The result hasn’t been a completed revolution in the manner of 1789 and 1917, or utter collapse as in 1991, but more like the prolonged period of instability that preceded the settlement of Westphalia in 1648. Neither side can wipe out the other. A resolution, when it comes, may well defy the terms of the struggle. None is remotely visible as I write these lines.

If my thesis is true, we have entered a historical period of revolutionary change that cannot achieve consummation. Institutions are drained of trust and legitimacy, but survive in a zombie-like state. Governments get toppled or voted out, but are replaced by their mirror images. Hierarchies are brought low, but refuse to yield the illusion of top-down control. Hence the worship of the heroic past, the psychology of decadence — the sense, so remarkable in a time of radical impermanence, that there’s nothing new under the sun.

Sometimes he describes what appears to be a dialectical historical process, in which an age of widespread affluence and education paradoxically produces an equally widespread miasma of nihilistic anger. Other times, his focus is more personal and psychological, as when he attributes nihilism to “radical ingratitude” — an inability to hold realistic expectations of both human nature and of the ability of technology, government, etc. to “solve” the tragic dimension of human existence. Again, events seem to be moving too fast to be included in revised editions. In the last year alone, the utter beclowning of mainstream media, public health officials, and elected representatives has been almost too painful to watch. “Rebels” of both the right and left live in fantasy role-playing worlds of cool costumes and worn-out slogans, and have nothing to offer but condemnation and destruction. The response to this upheaval from hapless elites is to double down on demanding respect for their dwindling authority and attempting in vain to censor and control “misinformation.” But if we are in fact living through the most radical changes in media, technology and mass society since Gutenberg, the ripple effect is likely to go on for decades or longer. Perhaps the best we can hope for is to manage to avoid the twenty-second century equivalent of Europe’s religious wars.