May 15, 2021 By Damian in books, foolosophy, juxtapositions No Comments

Writing about the cosmology of the Trobriand islanders, anthropologist Susan Montague tells us that the Trobriand universe is a vast disembodied space filled with both minds and energy. Cosmic minds are all-seeing, all-knowing, and all-powerful, able to manipulate the energy of the universe toward whatever end they desire. But in spite of, or rather because of, these remarkable endowments, cosmic minds have a problem: cosmic boredom. They have the power to do anything they wish, but because they have no needs, that power has no purpose. They may be all-knowing, but to be all-knowing means there’s nothing to think about. So they sit around bored to death or, rather, bored to life, because as it happens, they have invented a way to relieve cosmic boredom: it is to play the amusing game of life. To play, you must be born into a human body, and to be born as such, you must forget the fullness of what you knew and work only with what can be known through the body. A human being is someone who has abandoned the boring surfeit of knowledge so as to come alive.

— Lewis Hyde, A Primer for Forgetting: Getting Past the Past

Soon after TIA was initiated, a similar DARPA program was taking shape under the direction of a close friend of Poindexter’s, DARPA program manager Douglas Gage. Gage’s project, LifeLog, sought to “build a database tracking a person’s entire existence” that included an individual’s relationships and communications (phone calls, mail, etc.), their media-consumption habits, their purchases, and much more in order to build a digital record of “everything an individual says, sees, or does.” LifeLog would then take this unstructured data and organize it into “discreet episodes” or snapshots while also “mapping out relationships, memories, events and experiences.”

LifeLog, per Gage and supporters of the program, would create a permanent and searchable electronic diary of a person’s entire life, which DARPA argued could be used to create next-generation “digital assistants” and offer users a “near-perfect digital memory.”

…Edward Snowden, the NSA whistleblower, notably warned in 2019 that Facebook is just as untrustworthy as US intelligence, stating that “Facebook’s internal purpose, whether they state it publicly or not, is to compile perfect records of private lives to the maximum extent of their capability, and then exploit that for their own corporate enrichment. And damn the consequences.”

Snowden also stated in the same interview that “the more Google knows about you, the more Facebook knows about you, the more they are able . . . to create permanent records of private lives, the more influence and power they have over us.” This underscores how both Facebook and intelligence-linked Google have accomplished much of what LifeLog had aimed to do, but on a much larger scale than what DARPA had originally envisioned.

Social scientists dream of situations immune to interference by unpredictable human factors. But it turns out that in human affairs no situation is manproof. However high the degree of automation and however overpowering the nonhuman factors, the human elements of enterprise, courage, pride, faith, malice, stupidity, sloth, and the capacity for mischief remain decisive.

— Eric Hoffer, Before The Sabbath

May 15, 2021 By Damian in aphorisms, books, obiter scripta No Comments

51 The art of letting things alone: to be practiced the more so the wilder the waves of public or of private life. There are hurricanes in human affairs, tempests of passion, when it is wise to retire to harbor and ride at anchor. Remedies often make diseases worse: in such cases one has to leave them to their natural course and the moral suasion of time. It takes a wise doctor to know when not to prescribe, and at times the greater skill consists in not applying remedies. The proper way to still the storms of the vulgar is to hold your hand and let them calm down of themselves. To give way now is to conquer by and by. A fountain gets muddy with but little stirring up, and does not get clear by our meddling with it but by our leaving it alone. The best remedy for disturbances is to let them run their course, for so they quiet down.

— Gracian, The Art of Worldly Wisdom

The online world seems to exist in a tropical climate. Storms of the vulgar, hell; it’s a years-long rainy season out there. I’d love to believe things will quiet down on their own, but I suspect we’ll just have to move to a temperate internet zone, if there are any.

May 11, 2021 By Damian in books, jests japes jokes jollies No Comments 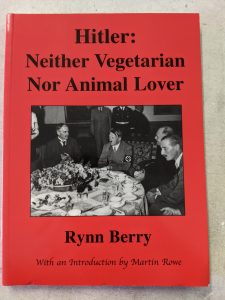 Wow. Just when you think you know a fellow. I’m really having to rethink my opinions on this Hitler guy.

The Playground of Another’s Thoughts

When we read, another person thinks for us: we merely repeat his mental process. In learning to write, the pupil goes over with his pen what the teacher has outlined in pencil: so in reading; the greater part of the work of thought is already done for us. This is why it relieves us to take up a book after being occupied with our own thoughts. And in reading, the mind is, in fact, only the playground of another’s thoughts. So it comes about that if anyone spends almost the whole day in reading, and by way of relaxation devotes the intervals to some thoughtless pastime, he gradually loses the capacity for thinking; just as the man who always rides, at last forgets how to walk. This is the case with many learned persons: they have read themselves stupid.

— Nietzsche, Human, All Too Human: A Book for Free Spirits

Well, I typically do my reading in the couple of hours before bed, so I guess I’m keeping it within proper limits. I don’t know that I do any worthwhile thinking, or perhaps I should say woolgathering, during the rest of the day, but then again, I don’t have an inheritance (Schopenhauer) or a small pension (Nietzsche) to keep my time and thoughts free of more prosaic matters.

Nevertheless, it is true that we do well to not allow our thoughts to be captured by the inane ruckus made by peers and events. For my part, when I have a little spare time during the workday, rather than waste it on seeing what everyone on social media is shouting about, I like to browse a site like Redbubble and see what sorts of clever or amusing creations can be found under favorite topics. So, for example, what do you find if you do a search for G.K. Chesterton? 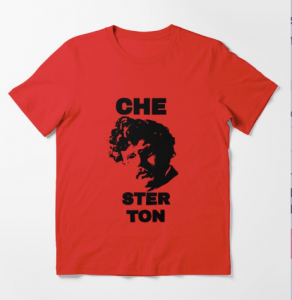 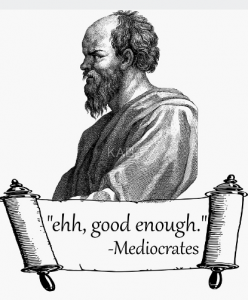 My favorite Greek philosopher. So human, so relatable. 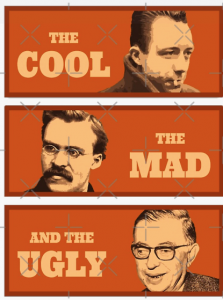 I may have already ordered a sticker of this one for my laptop. 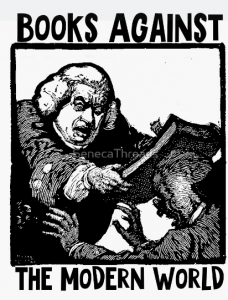 I find myself captivated by this artwork. It speaks to me. What’s the story behind this? Is there a group I can join?

While reading Ian Mortimer’s The Time Traveller’s Guide to Regency Britain, I came across a brief portrayal of a woman I’d never heard of before, Harriot Mellon. To summarize what Mortimer says: In 1777, she was born the illegitimate daughter of an Irish peasant woman. She makes an early living tending to the clothes of a group of traveling actors, which leads to her first role on stage at the age of ten. By her late thirties, she is making six hundred pounds a year from acting — “pocket money” for her at this point, Mortimer says. For she has attracted the amorous attention of Thomas Coutts, the principal partner of Coutts Bank. After his wife dies of dementia, the seventy-nine-year-old Thomas and the thirty-seven-year-old Harriot are married, and spend seven evidently-happy years together.

Coutt’s three adult daughters are unkind to her, fearing the possibility of being disinherited by this gold-digging tramp, and through this unkindness, they bring about, in a downright Greek-tragic twist, their fate: Thomas, dismayed by their attitude, leaves everything to his wife, including his partnership in the bank. Yet Harriot is not vengeful; she continues to provide her “stepdaughters” with an annual allowance of ten thousand pounds.

High society is no more welcoming to her, especially when, in 1827, she marries again, this time to the duke of St. Albans, twenty-three years younger than her. Society ladies shun her for rising above her station, but this marriage too is evidently a happy one. From penniless peasantry to life as a duchess with a personal fortune of two million (which she controls herself through her partnership in the bank) — quite a compelling story, I thought. I’m surprised she hasn’t been adopted as an inspirational heroine by popular culture. Wikipedia says there is one biography of her by Joan Perkin, The Merry Duchess, though Amazon also shows a public-domain printing of her memoirs, as well as this account of her life.

Mortimer’s series of “time-traveller” guidebooks to British history are always entertaining as well, if you’re unfamiliar with him.

Interlude: Thao & The Get Down Stay Down, “We Don’t Call”

Because I Am Attached to You