All the World’s Become a Soap Opera

June 2, 2021 By Damian in books, foolosophy, the geist of the zeit No Comments

Anderson draws an unflattering portrait: “A preoccupation with myself, a wish, even a need to talk about myself and my problems, a predisposition to think such problems happen to me and an aversion to assume responsibility for them, perhaps a view of myself as a victim with rights denied, and a belief that talking is the first stage to curing the problems together with a government and a range of policies which endorse such tendencies: this sort of culture is what might be termed therapeutic.”

— Elisabeth Lasch-Quinn, Ars Vitae: The Fate of Inwardness and the Return of the Ancient Arts of Living

The Lady of the House recently had to resign from a small entrepreneurial group she’d started years ago. Originally, it had been designed as a way for friends with “micro-businesses” to meet every couple weeks to exchange information and strategize together. Our own business has long since outgrown the “micro” prefix to become a genuine small business which monopolizes much of our time and energy. Since the others mostly dabble in business as another means of self-expression, rather than in order to make a living by providing a useful service, the group had become less helpful as a result, and with the increased time constraints, it was time to bid them adieu. One of the other members, who only joined about a year ago, had been incommunicado ever since the Lady’s resignation, but finally got in touch to confess that she had been in “a really dark place” as a result of her “abandonment issues” being triggered. She thanked the Lady for her attempts to reach her previously, though, “because no one else ever does; I always have to make that move.”

Of course, there’s nothing stopping her from simply keeping in touch via email, Facebook, Instagram, Skype, Facetime, etc. It’s “I can’t make these biweekly meetings anymore,” not “Goodbye forever.” It’s not as if the Lady boarded a ship to America in 1697 and will likely never be seen again. The psychodrama is the point, though, especially when it’s out of proportion to the circumstances. Like most shallow acquaintances, she might make a couple sporadic attempts to get in touch in the coming months before never being heard from again, but to act as if a lifelong bond is being torn asunder by the cruel talons of fate, ah, that’s the good stuff. (It’s not just this particular instance, either; her Instagram feed is full of similar displays of emotional incontinence.) It’s Oscar Wilde’s definition of a sentimentalist, someone who wants to have the luxury of an emotion without paying for it. Why has this kind of posturing become so widespread? Is it true what curmudgeons have always said, that affluence and comfort inevitably breed ennui and decadence?

The really amusing thing about this is that, not five minutes after the Lady had finished telling me about it, I happened to be holding a copy of Art Donovan’s autobiography, Fatso: Football When Men Were Really Men. I took a few pictures for posterity as I leafed through it, but I can only imagine how much more there would be if I actually sat down to read it. Naturally, I’m glad that this sort of casual brutality is out of fashion, but I also admit that reading about it provides something of a bracing tonic to the weepy, invertebrate sentimentalism in fashion today. 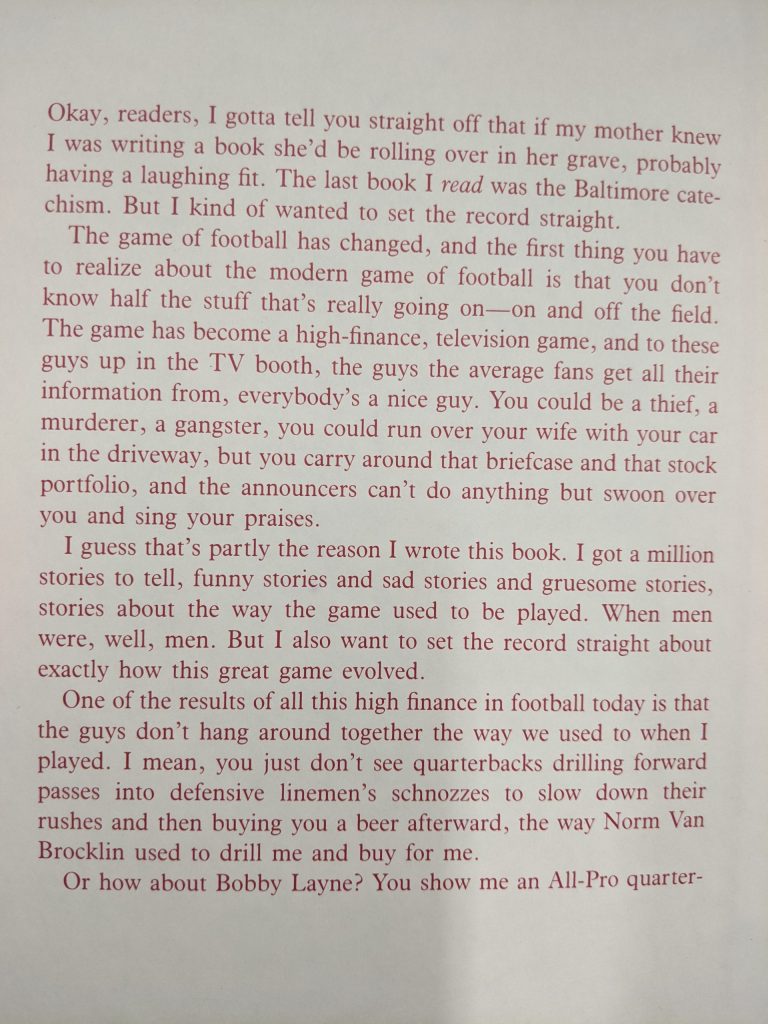 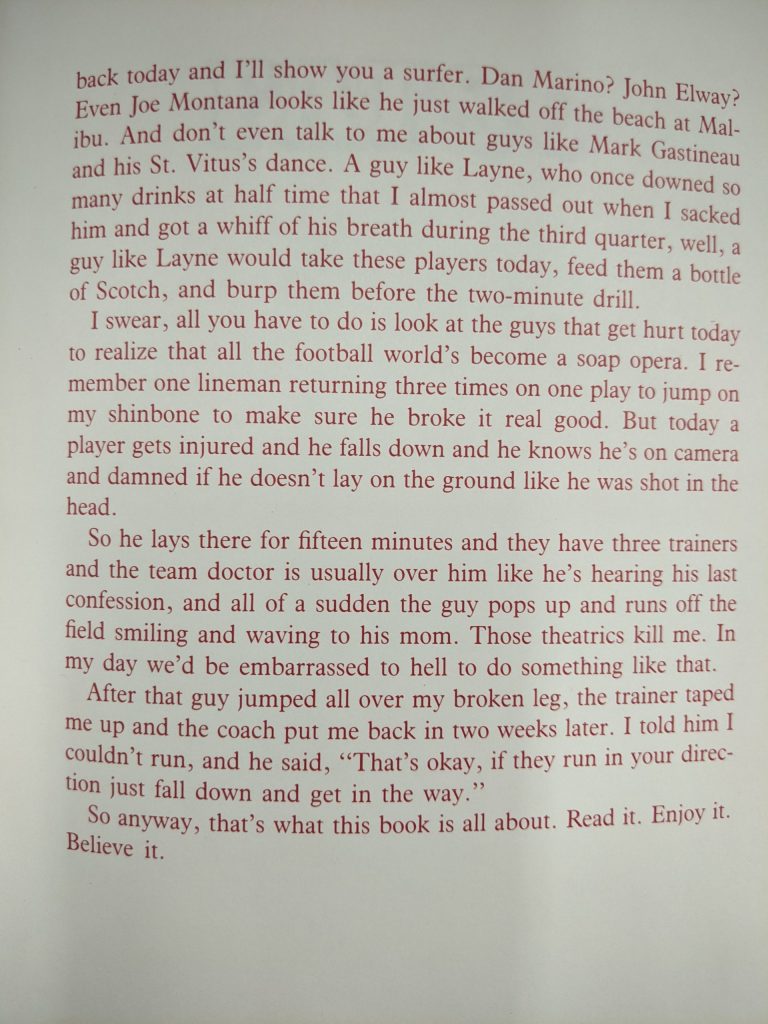 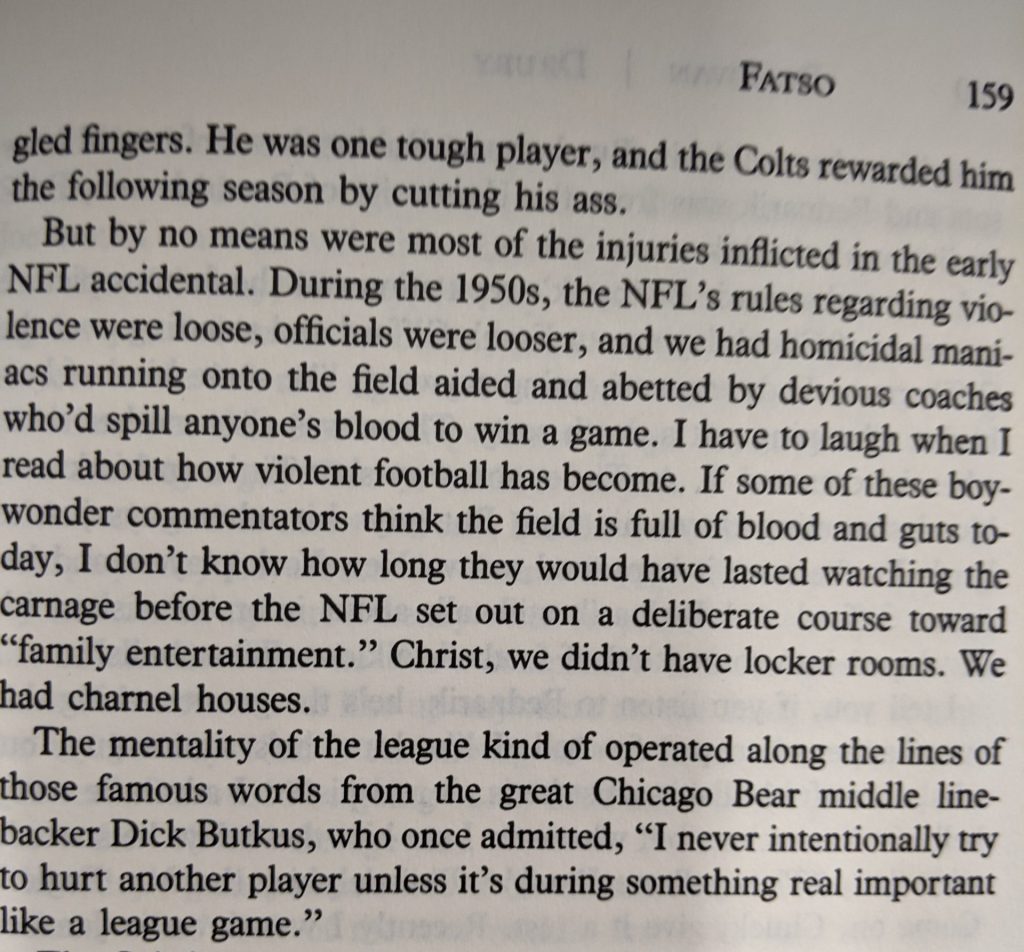 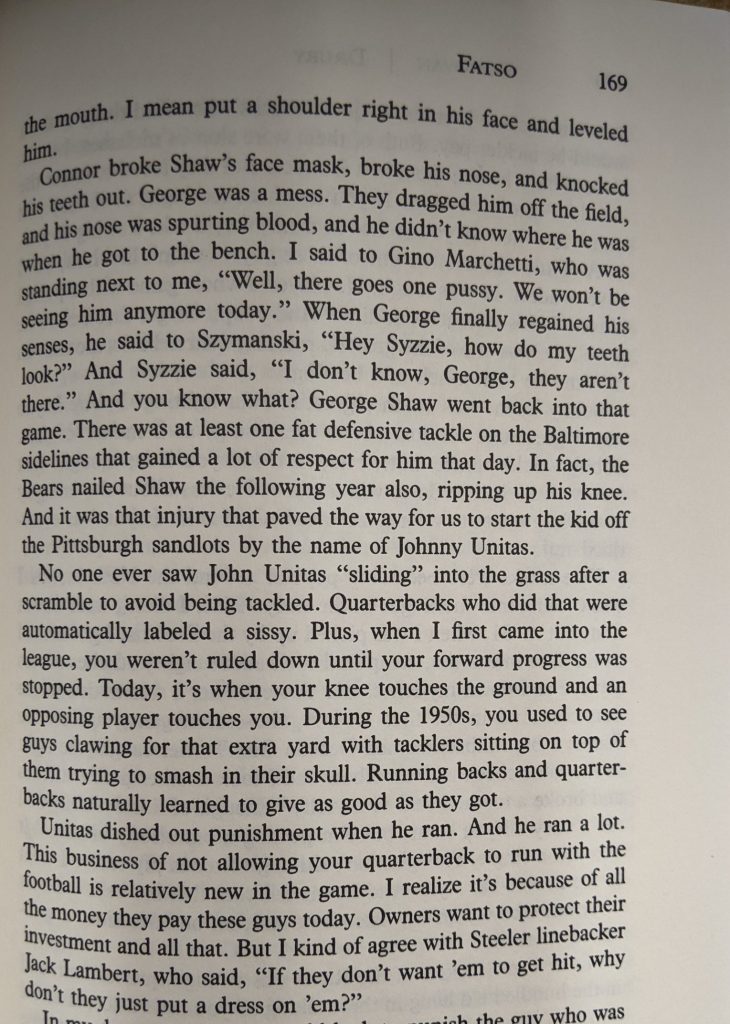 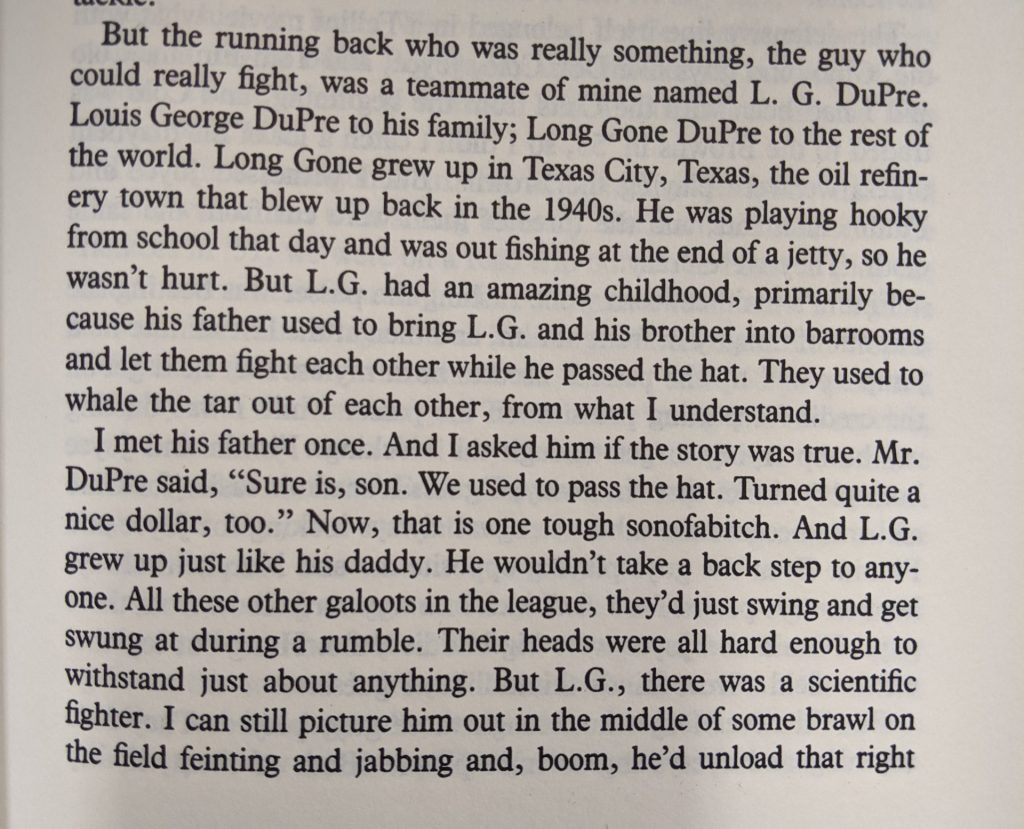 « Interlude: Elbow, “Every Bit the Little Girl”» Once You’ve Made That Money, It Costs More Now. It Might Cost a Lot More Than You Think