A good critic always puts more into writing about art work than the artist put into making it. The artist only creates. The critic must plumb that creation & also write creatively enough to deliver the full volume of the art while also creating a thing of beauty & clarity itself.

“Without me, this whale would be nothing,” said the remora.

(I like that when numerous, uh, critics pop up to, uh, plumb this creation, he tries to credit/blame Oscar Wilde for it.)

January 19, 2021 By Damian in fresh hell, identity, race, the cult of multi No Comments

The modern left is Janus-faced, effortlessly alternating between identitarianism and Marxishness as circumstances require. Until now, many had thought this schizophrenic marriage would be too unstable to endure, with the mutually-incompatible premises and demands of each side destined to end in acrimonious disaster. But what if some political alchemist could find a way to meld the two into a cohesive whole? What if the personal and the political truly were identical?

December 29, 2020 By Damian in fresh hell, the geist of the zeit, tribalism No Comments

Declaring those with views and priorities different from your own scary — or extreme or whatever other moralistic adjective is in vogue at the moment — isn’t a way to advance that debate, but a way to avoid having the debate at all, and to prevent its being had by others.

On that note, I happened to see a tweet from Bari Weiss today, enthusing over her discovery of Christopher Lasch:

Blown away. He saw around the bend. (Thank you for the rec @annakhachiyan + Red Scare!) pic.twitter.com/9BHwnOlrbY

So far, so anodyne, you might think. Lasch is indeed a writer worth reading. However, this is Twitter, so:

Although he saw around the bend in terms of critique of US meritocratic society, social sciences, and the left abandoning economic reform, his conclusions i.e. “family life” made his whole efforts a regression into a mild-mannered conservatism.

“Mild-mannered conservatism”! Bring me the smelling salts; I feel faint!

Someone makes the obvious response, to which our Twitter Torquemada retorts:

Not only bad, but evil.

A lyric from the late, great Lemmy Kilmister, who died five years ago yesterday, comes to mind: “You are the spooks you’re chasing; you know not what you do.” There’s a certain “chef’s kiss” perfection to this little vignette that just delights me — “His observations were accurate, but his conclusions were unacceptable to me, so he’s not just mistaken, he’s evil.” I see we’ve learned absolutely nothing from the last four years of squandered intellectual integrity. When your entire political identity is based upon opposition to “conservatism,” however reasonable and mild-mannered, this is the sort of logical dead-end you end up in. Well, if you’re going to demonize someone as inoffensive as Lasch, don’t be surprised when forbidden fruit like Joseph de Maistre or Carl Schmitt start to seem tempting to people who are tired of your neverending hysterics.

Well, It Took a Lot of Work to Be the Ass That I Am

The problem is the WSJ attacked the Democrats core-constituency: over-educated college grads who want even more recognition in society https://t.co/LSyar3IG5a

Which brings us, as it happens, to the real thrust of Epstein’s essay. At bottom, it wasn’t a dig at Jill Biden. No, that was just Epstein’s way of introducing his actual, and serious, subject. And that subject was the increasing meaninglessness of advanced degrees in the humanities and social sciences.

“The Ph.D.,” Epstein lamented, “may once have held prestige, but that has been diminished by the erosion of seriousness and the relaxation of standards in university education generally, at any rate outside the sciences.”

For the record, I have un-remembered every essay of Epstein’s that I may have read, I have deleted every post in which I quoted him, and I have used all of his books for kindling. It’s the least I can offer to help undo the grave besmirchment our clerisy has suffered from this insolent autodidact. 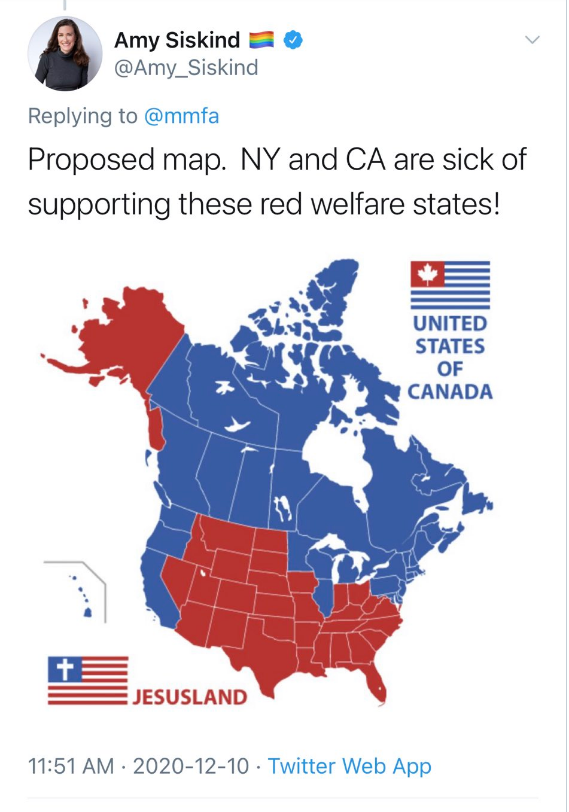 As someone with relatives in western Canada, I find it, uh, remarkable how blithely American progressives just assume they would be welcomed as liberators/comrades in this reboot of Manifest Destiny. I mean, I expect simpletons like this, who treat the various nations of the world as a backdrop for their selfies, to be ignorant about, say, Tibet, or any other object of their utopian fantasies. But Canada? Have you seriously never met any Canadians? I can personally introduce you to quite a few who would love to have Trump take over as Prime Minister now that we’re done with him. I can’t wait to tell them that 100 million of the Trudeau-iest Americans are moving in permanently.

Have You Heard the Good Housekeeping News?

December 5, 2020 By Damian in fresh hell, the cult of multi, the geist of the zeit, the great awokening No Comments

I mentioned to the Lady of the House that I was thinking about getting a steam mop for the linoleum floors. She suggested I check reviews at Good Housekeeping. So over I clicked, to be greeted with: 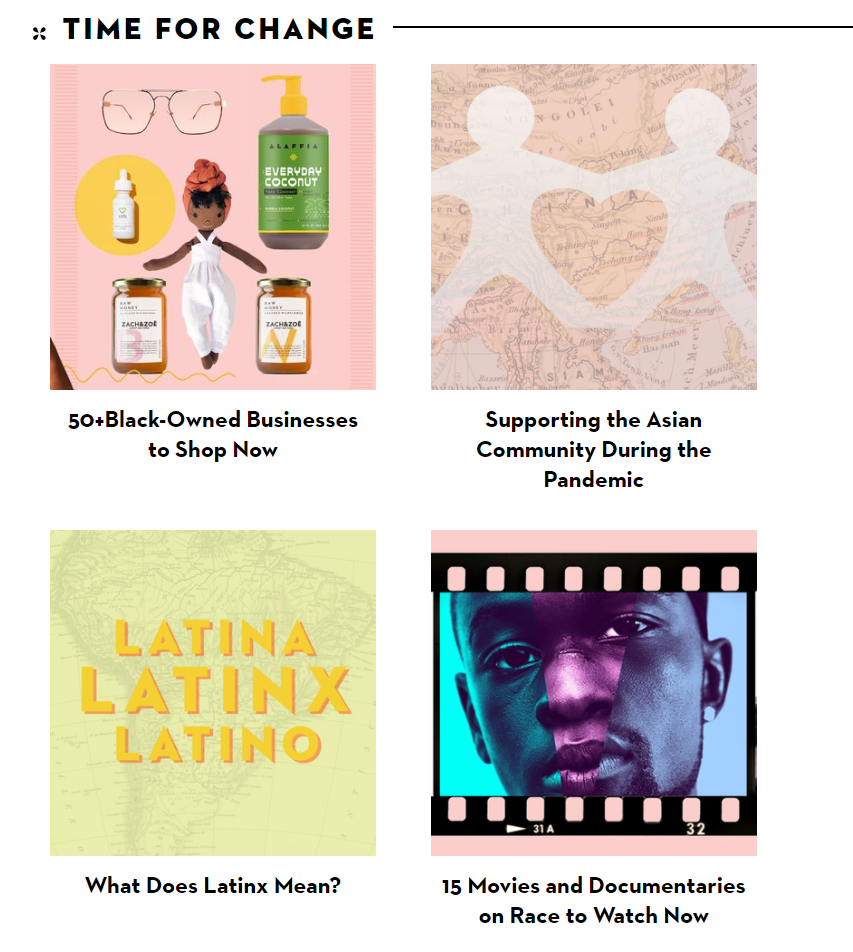 I mean, really. Can a fellow not simply research how to get the kitchen floor shiny without having to submit to a struggle session and interrogate his privileging of the dominant paradigm which subordinates floors of color to a colonialist ideal of bright whiteness? Before the internet, there was only one instance in my life when a stranger came up to me in a parking lot and handed me an evangelical tract, which I promptly threw away. Now, the fundamentalist preachers of Diversity and Inclusion™ are standing around the entrance to nearly every website, pressing their literature in our faces, and stashing cookies in our browsers so they can track us down later. I’m tempted to make a wisecrack about whited sepulchres, but I fear in today’s climate, that would only be taken as a covert expression of racism.

November 6, 2020 By Damian in fresh hell, the geist of the zeit No Comments

Anger and jealousy can no more bear to lose sight of their objects than love.

— George Eliot, The Mill on the Floss

I’m sorry, did you have the mistaken impression that we could maybe take a deep breath and give our amygdalae a break now? That’s adorable. Is this your first time reading about current events on the Internet? 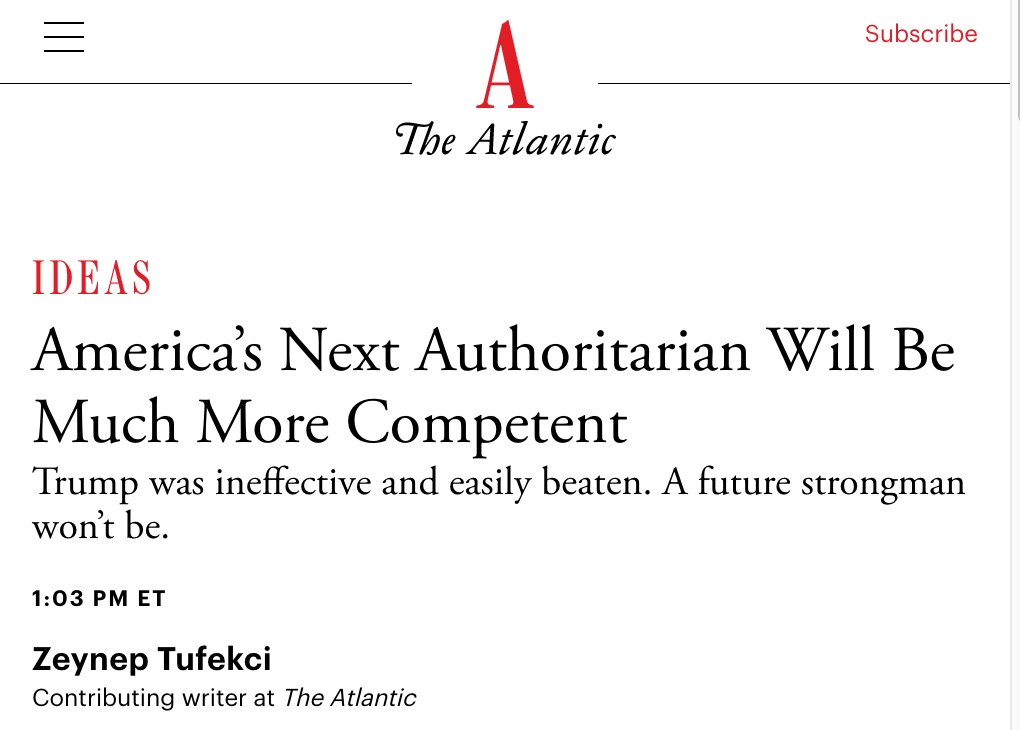 Ineffective and easily beaten! Then what was all the shrieking hysteria about these last several years? What a piss-poor fascist he turned out to be! Really, though, the best part, for me, is seeing Tufecki stick a flashlight under her chin as we huddle around the campfire while she warns us to beware of future authoritarians like…Joe Rogan. My God. These addicts have tapped out all the veins in their arms and legs and are now at the stage where they’re injecting melodrama straight into their necks.

It’s been a busy summer. So busy, in fact, that we’ve leased a bigger workspace and will start moving into it shortly. The busy-ness may continue a while longer, then, but never fear, I will soon return to entertaining you more regularly with my wit and wisdom while you waste time at work. In the meantime, let’s just marvel at the spectacle of a “news” organization modeling their presentation on gags from the Naked Gun movies:

You cannot make this up… A CNN reporter is standing in front of a building engulfed in flames and CNN’s chyron reads:

It’s Not the Future That I Can See, It’s Just My Fantasy

A little over three years ago, some brilliant seer gazed into the future and reported back:

Nowadays, I’m sure there are brilliant minds working hard to figure out how we can implant SIM cards in our frontal lobes so that we can keep up with the Kardashians without having to go to all the exhausting labor of manipulating our pocket computers with our fingers, like savages.

The brain chip’s initial aim is to help people with neurological disorders such as OCD, depression and anxietyhttps://t.co/bWXbmifCTt

Yes, yes, the “initial aim” is always something unobjectionable and beneficial. What’s actually interesting is trying to imagine all the ways in which humans will inevitably harness new technologies to serve the same old ends of hedonism, power struggles, and violence. Musk seems to believe that the best defense against the possibility of hostile AI is for humans to become cyborgs by means of wires implanted in our brains, allowing us to interface with technology at the speed of thought. Did I say interesting? I meant horrifying.

The Unacknowledged Legislator of the World

July 16, 2020 By Damian in fresh hell, history, waiting for the barbarians 1 Comment

I’ve said before, with only the tip of my tongue in my cheek, that Oprah Winfrey is “no more a person now, but a whole climate of opinion under which we conduct our differing lives.” (Yes, technically, Auden first said that about Freud, but Sigmund has nothing on Oprah when it comes to the reach of their respective pernicious influence. I’m confident that W.H., were he around today, would agree with me.) Now, with the news that Oprah is going to bring the risible 1619 Project to film and TV, it looks like she’s going to add pseudo-history to her legacy, in addition to the pseudo-spirituality and maudlin therapeutic sensibility she’s already known for. As if we weren’t already close enough to living in Idiocracy.