May 30, 2009 By Damian in gender, language, ohferfucksake, race, the cult of multi, tribalism No Comments

One thing that makes me suspect that right-wingers have a rudimentary sense of humor is the way they keep turning the logic of identity politics back against the clueless advocates. Poppy Bush put a black man on the Supreme Court. Junior gave us a Hispanic attorney general, a black “war hero” Secretary of State, and even replaced him with a black female (and likely lesbian!) Secretary of State. (Needless to say, domestic justice finally became fair and colorblind, and we never again treated the world like our colonial playground.)

But do mainstream liberals progressives ever learn? Would I be writing this if they did?

Finally, Liddy disputed the entire idea that there’s anything wrong with the paucity of women and total lack of Hispanics on the Court:

Oh, is that all it takes? A woman and a Hispanic? So…you guys would have been overjoyed at Justice Harriet Miers and Chief Justice Alberto Gonzalez, then? No? Ahhh — so you mean you want a female, a Hispanic, etc. who share the same political values as you on the Court. But wait, then, I’m confused — if the values and ideals are what matter, couldn’t they, in theory at least, be held by anyone? Would you really care if you had nine fishbelly-white Penis-Americans on the Court as long as they upheld progressive values in their rulings? Or are we getting into some mystical racial/gender essentialism, where the solipsist logic implies that no one can ever truly understand anyone else?

So, basically we have liberal progressive white guilt that only allows people to serve in power as proud representatives of their race or gender as long as they agree with the white progressives who would feel uncomfortable about running things themselves. A kinder, gentler form of satrapy, I guess.

To Hitler and Beyond!

May 22, 2009 By Damian in fresh hell, jests japes jokes jollies, moralizing, the cult of multi No Comments

May 20, 2009 By Damian in germans supported their troops too, language, ohferfucksake, tribalism, waiting for the barbarians No Comments 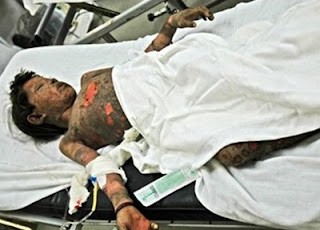 More concern for the “innocent babies” than the right of those dropping bombs on them to be open about their sexuality? Such knavish rot! Glib usage of idiomatic phrases involving forests and trees? I’ll have no more of your scurrilous raillery! Good day to you, sir!

May 19, 2009 By Damian in bread and circuses, jests japes jokes jollies, language, ohferfucksake No Comments

Well, they should be furious!

Really, though, as amusing as it is to watch Republicans occupy themselves with such momentuous issues, I’m actually more looking forward to another round of netroots grumbling over what a terrible, terrible insult it is to drop the “-ic” from “Democratic”. See, I’ve been told, in the utmost seriousness, that calling it the “Democrat party” is a way of emphasizing the sound of the word “rat”…which oh noes is going to make the voting public think we’re a party of dirty sewer-crawling rats!!!!!

Somehow, though, this doesn’t lead anyone to the conclusion that identifying individuals as Democrats will have that effect. So:

That speaks for itself, doesn’t it? I’m too busy snickering and shaking my head to find anything funny to add to that.

The Virtues of Man Without His Vices

May 18, 2009 By Damian in animals, ohferfucksake No Comments

How bad is this kind of reductionist thinking? It’s so bad that even Jonah Goldberg knows better. When you get schooled by the author of Liberal Fascism, well…

Seriously, by that logic, I suppose your toddler doesn’t love you either, since they would adjust to a new family if they were given to one. Is that the standard for love, then? How long you would pine away for your absent loved one?

It seems like the idiotic base assumption is that humans, by contrast, are capable (in theory, if not practice) of a true Platonic, altruistic love, independent of anything as lowly as pleasure or quid pro quo behavior. News flash: there is no such thing as “unconditional” love, and devaluing the kinds of love we do have because they aren’t eternal and unchanging is thunderfuckingly stupid. I think we have a word for someone who devotes a large amount of time and energy to meeting the needs of someone who couldn’t care less about them or their needs: a slave. If that’s not you, well, then, as Max Stirner pointed out a long time ago, your love is based to a large degree on how the object of your affection makes you feel and what they do for you, and most likely, you would eventually get over it if you lost them. That doesn’t diminish it at all or mean that your feelings are misguided because they don’t measure up to some ridiculous abstract standard set by one of the most useless philosophers that ever put quill to parchment.

May 16, 2009 By Damian in germans supported their troops too, the cult of multi, tribalism, waiting for the barbarians No Comments

The White House is backed up against the wall and cannot give a reasonable, logical defense to continue a policy that is hurting our military effectiveness.

Remember when lefties were concerned with, you know, hurting our military effectiveness instead of trying to ensure that the vast, bloated, ravenous, resource consuming machine known as the U.S. military had a superficial veneer of racial/gender/sexual diversity as it went about its business subjugating the world? No? Damn, I’m old.

Hey, anyone who rilly rilly wants to devote their life to possibly getting their ass shot off to make the world safe for American corporate interests to do business in should have that right, certainly — but maybe they should be thinking about more radical agendas than identity politics.

YOU’RE the Vulgarian, You Fuck!

May 16, 2009 By Damian in jests japes jokes jollies, language No Comments 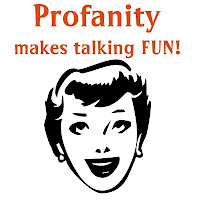 Funny post on a subject near and dear to my heart, foul fucking language.

I honestly can’t stand those lame attempts to write the curse without actually writing it. “Look here! I know a cuss word, but I’m too genteel to use it. Ha!” Then why the fuck even bring it up? If you can’t or won’t use the word, why even type a small part of it? Search deep into your vast language resources and find something else to replace it altogether. Is that how you say them when you speak? “Oh, sh-exclamation point-teh!” “F-asterisk percent sign-K you!” Really? Somehow I doubt that.

I just saw a comment about Arlen Specter somewhere the other day, where the writer wished death upon him in a few different ways, but then bowdlerized the word fuck with a punctuation mark. Because saying that would have been crass, I guess.

May 12, 2009 By Damian in jests japes jokes jollies No Comments

So, I’m reading some of the latest installments of my favorite online soap opera — you know, the one where America the InnocentandVirtuous is in danger of losing her soul to the forces of evil again? Yeah, I know, that’s how every episode goes, but this time it’s about the torture issue. Anyway, as always, there’s lots of anguished wailing and rending of garments, lots of histrionics about the razor’s edge between salvation and damnation, centered on an exchange between Chris Matthews and Harold Ford. Digby treats it with gravity as she always has, but I also find a link to Atrios, who, I remind you, is one of the biggest liberal bloggers there is.

Seriously, this would be like hearing a famous piece of dramatic music — Ride of the Valkyries, O Fortuna, Tocatta & Fugue in D Minor, perhaps — punctuated at certain points by a slide whistle. Incongruent to say the least.

May 9, 2009 By Damian in music, saturday shuffle No Comments

Well. That was all over the place.

Pat Healy: I work with retards.
Mary: Isn’t that a little politically incorrect?
Pat Healy: Yeah, maybe, but hell, no one’s gonna tell me who I can and can’t work with.

Uh-oh. Who do I go with here? James Wolcott would like it to fall into disuse, but Kevin K. was one of the first to add me to his blogroll, back when he ran Catch.com. Gotta appreciate someone being generous to a no-name blogger, but on the other hand, it’s James Wolcott. Decisions, decisions.

Seriously, though — generally speaking, I tend to agree with George Carlin’s famous rants about “soft” language. I only shy away from insults and epithets when it’s blindingly obvious they’re rooted in misogyny and homophobia (which, as IOZ points out, is different in degree rather than kind from misogyny). Using “retard” or “retarded” to refer to fatuous people or ridiculous events just doesn’t strike me as having the same sort of ugly hatred underlying it.

But if it should become the sort of word that is more trouble to use than it’s worth, no problem. I’ll devote my efforts to restoring the derisiveness formerly inherent in “gongoozler” (a dimwit who stares at unusual things, according to this little gem of a reference book).