If the Mountain Won’t Come to Muhammad, Fuck It, He’ll Invent His Own Mountain

September 27, 2010 By Damian in foolosophy, religion, spiritual-not-religious No Comments 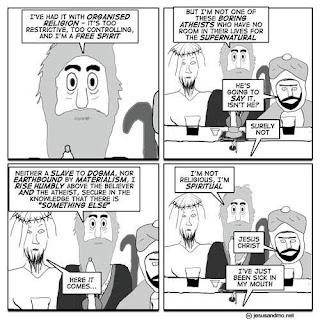 The religious message is “less clear when you wear an Om and you have no idea what it means,” says Prothero. “Smooshing the Buddha together with a cross and star of David has a clearer message of someone who is spiritual and doesn’t belong to one religion.”
He adds that even though all of these symbols may be floating through the fashion world on shiny gold bangles or set with diamonds, people should be religiously literate and know what the symbols they’re wearing stand for. “I’m torn. Sometimes I do get annoyed when venerable religious symbols get dumbed down, but when has it never been like that? Besides, all religions are just different paths up the same mountain.”

Of course, those who claim that the world’s religions are different paths up the same mountain do not deny the undeniable fact that they differ in some particulars… It is to deny that those differences matter, however. From this perspective, whether God has a body (yes, say Mormons; no, say Muslims) or whether human beings have souls (yes, say Hindus; no, say Buddhists) is of no account because, as Hindu teacher Swami Sivananda writes, “The fundamentals or essentials of all religions are the same. There is difference only in the nonessentials.”
This is a lovely sentiment but it is untrue, disrespectful, and dangerous.

Hee hee. Hope those two can work out their profound differences! Anyway, blatant contradictions aside, I’m actually sympathetic to the devoutly religious who have to see meaningful symbols of their beliefs used as trendy accessories by airheaded celebrities and fashionistas. I mean, I’d be willing to bet that 99% of the time, when you see someone “smooshing the Buddha together with a cross and a star of David”, the “clearer message” you’re actually getting is one of a vapid twit who doesn’t understand anything about any of them, but ooh, shiny bauble look purty, must have, must have!
While I’m being generous toward my bête noire here, let me also concur with a typical complaint you hear from traditional quarters regarding this buffet-style spirituality: it also can encourage a sort of dilettantism, a shallow tendency to stay right where you are and look for various concepts and themes to basically wall yourself in, to tell yourself what you want to hear. Sort of like how allowing high school students to set their own curriculum might lead to them concluding that the Twilight series is the pinnacle of all fiction and there’s no need to try anything that doesn’t cater to the way they feel right here, right now. One of the possible benefits to picking one faith/tradition and sticking to it is that you’re forced to grapple with issues and concepts and rules that might not appeal to you or make sense initially, and out of that, a new kind of understanding might result, if not acceptance. Growth through struggle. Too many of the spiritual-not-religious types are complacent and looking to avoid struggle, having already settled into a comfortable niche, and are now just looking to accentuate it with exotic accoutrements.
« The Old College Try » Hypatia’s Revenge