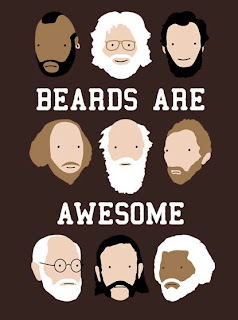 Via PZ, this is funny:

In western countries in particular, a few years ago beards were often confused with a segment of society that reflected rebellion, namely the “hippy” movement of the 60’s and 70’s. It was felt that we should not in any way resemble those that reflected an attitude like this, or the drug culture that went along with it. We have to separate ourselves from that, and to have a beard a few years ago could be confusing, especially to an older generation of people at that time that were especially repulsed at the conduct of those of the younger generation. Even though we are some 30 or 40 years removed from that situation that existed during the late 60’s and early 70’s, it has been proven by experts that some people on some subconscious level do not trust a man with a beard. The underlying message that some get from a beard is that if you have one, you have something to hide, as if you are hiding behind the beard. I have even heard that idea expressed in sales courses that I have taken for secular activities. Beards are discouraged by some sales trainers because of the subconscious message that some people receive from a person with a beard, and some feel that a person without a beard generally speaking has a more professional appearance than a person who does.
…In the 1950s, in the the USA, beards were widely unpopular among the general public and most men who wore one were immediately perceived as beatniks (and later, hippies). In that American, Cold War climate, a young man who didn’t sport a military-esque brush cut and bare chin was out-of-hand labeled a communist or homosexual.

Beatniks, commies and homos, oh, my! But wait a minute…so, acting too stereotypically feminine will get a man accused of being queer, but sporting a beard, the quintessential symbol of masculinity and testosterone…also means you’re a gender traitor? Damn, they’ve got us coming and going, don’t they? Sort of like how they used to say that a witch could present herself as a beautiful young girl or a repulsive old hag. If I didn’t know better, I’d think all this paranoia was reflective of some weird psychological turmoil on the part of the accusers.
In all honesty, one of the greatest things about living among such uptight reactionaries is that they make it so easy to be subversive. No need to actually do anything confrontational or destructive, just let your facial hair follow its natural course!
Speaking of which, here’s another slander I’ve heard a time or twenty in my life:

Paul, the apostle, said something similar in 1Cor 11:14 about long hair being a dishonor to a man… Obviously Paul’s words were intended for his militant Roman contemporaries. That society started the cropped military haircut and clean-shaven face to keep lice to a minimum and avoid giving an enemy something to grab, in a skirmish.

Well, we might have many parallels with ancient Rome, but I’m pretty sure modern hygiene and grooming have rendered the lice issue largely irrelevant. And we blow our enemies up with robot planes from the safety of a control center far away from the battlefield, so I don’t think hand-to-hand combat is as prevalent as it used to be, either. But that’s okay; like I said, hidebound traditions make such easy targets. And at least we don’t have to worry about being crucified for undermining social cohesiveness anymore.
And speaking of that, I find it most amusing of all that these people have no problem worshiping a savior who is constantly portrayed as having…long hair and a beard. Imagine the mental strife that would result should they be additionally forced to admit that a man born 2,000 years ago in Palestine wouldn’t have looked like a white Westerner.
« In the Depths of Their Humanity, All I Saw Was Bloodless Ideology » The Old College Try