January 21, 2012 By Damian in psychology No Comments 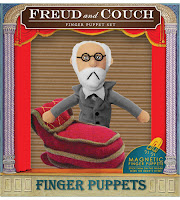 John Gray is another thinker whose output I generally appreciate, but, uh, what?

Yet several generations of intellectuals were in no doubt that he was a thinker of major importance. It is only recently that his ideas have been widely disparaged and dismissed. Initially rejected because of the central importance they gave to sexuality in the formation of personality, Freud’s ideas are rejected today because they imply that the human animal is ineradicably flawed. It is not Freud’s insistence on sexuality that is the source of scandal, but the claim that humans are afflicted by a destructive impulse.

…Freud’s thought is a vital corrective to the scientific triumphalism that is making so much noise at the present time. But more than any other feature of his thinking, it is his acceptance of the flawed nature of human beings that is offensive today. Freud’s unforgivable sin was in locating the source of human disorder within human beings themselves. The painful conflicts in which humans have been entangled throughout their history and pre-history do not come only from oppression, poverty, inequality or lack of education. They originate in permanent flaws of the human animal. Of course Freud was not the first Enlightenment thinker to accept this fact. So did Thomas Hobbes. Like Hobbes, Freud belongs in a tradition of Enlightenment thinking that aims to understand rather than to edify. Both aimed to reduce needless conflict; but neither of them imagined that the sources of such conflict could be eliminated by any increase in human knowledge. Even more than Hobbes, Freud was clear that destructive conflict goes with being human. This, in the final analysis, is why Freud is so unpopular today.

I’m afraid Gray is waggling his Freud puppet on his fingertip here, as partially evidenced by the fact that he doesn’t provide any examples of Freud’s thought coming in for fresh disparagement as an object of scandal. I daresay you could substitute Gray’s name for Freud’s in most of the excerpt above and get much closer to the heart of it, which might even be a modified version of what somebody once classified as “projection”. Granted, I don’t follow developments in the field very closely, which is to say at all, but as far as I’m aware, most people’s objections to Freud begin and end with the fact that his “scientific” theories were extracted from deep within his colon. Yes, I used an anal metaphor to dismiss Freudianism. Let the psychoanalysts stagger under the weight of the immense ironic density, bwa ha.