November 27, 2022 By Damian in books, juxtapositions, writing No Comments

To write is, indeed, no unpleasing employment, when one sentiment readily produces another, and both ideas and expressions present themselves at the first summons; but such happiness, the greatest genius does not always obtain; and common writers know it only to such a degree, as to credit its possibility. Composition is, for the most part, an effort of slow diligence and steady perseverance, to which the mind is dragged by necessity or resolution, and from which the attention is every moment starting to more delightful amusements.

It frequently happens, that a design which, when considered at a distance, gave flattering hopes of facility, mocks us in the execution with unexpected difficulties; the mind which, while it considered it in the gross, imagined itself amply furnished with materials, finds sometimes an unexpected barrenness and vacuity, and wonders whither all those ideas are vanished, which a little before seemed struggling for emission.

— Samuel Johnson, “The Happiness and Infelicity of Writers”

What things there are to write, if one could only write them! My mind is full of gleaming thoughts; gay moods and mysterious, moth-like meditations hover in my imagination, fanning their painted wings. They would make my fortune if I could catch them; but always the rarest, those freaked with azure and the deepest crimson, flutter away beyond my reach.

The ever-baffled chase of these filmy nothings often seems, for one of sober years in a sad world, a trifling occupation. But have I not read of the great Kings of Persia who used to ride out to hawk for butterflies, nor deemed this pastime beneath their royal dignity?

— Logan Pearsall Smith, All Trivia: A Collection of Reflections & Aphorisms

The captains of England, Wales, Belgium, Denmark, Germany and the Netherlands will not wear the OneLove anti-discrimination armband in their World Cup opening games after confirmation that their captains would be given yellow cards if they took part in the initiative.

The announcement came just before their World Cup campaigns were scheduled to start. The national federations said they were prepared to pay a fine for their captains to wear the OneLove armband, but once it became clear their captains would be sanctioned, they had to change plans.

“FIFA has been very clear that it will impose sporting sanctions if our captains wear the armbands on the field of play,” a joint statement from the nations read. “As national federations, we can’t put our players in a position where they could face sporting sanctions including bookings, so we have asked the captains not to attempt to wear the armbands in FIFA World Cup games.

“We were prepared to pay fines that would normally apply to breaches of kit regulations and had a strong commitment to wearing the armband. However, we cannot put our players in the situation where they might be booked or even forced to leave the field of play.”

Amazing what happens when the seemingly-irresistible force of woke Western virtue-signaling meets the immovable object of a non-Western culture impervious to guilt-tripping.

In the past ten days, I have unloaded five shipping containers (not single-handedly, of course, though rumors have begun to spread). Close to 100 tons of merchandise. I wish it to be known that I disavow any and all attempts to paint me as a modern-day Alexey Stakhanov. I hate to even dignify such careless talk with a response, but unfortunately, some have said that this sort of heroic labor, combined with my prodigious intellectual output, suggests that I may be an übermensch, a stud, or even a “chad,” as the youth say these days. I give no credence to such idle chatter. In no way do I deserve to be seen as the natural successor to Eric Hoffer, the longshoreman philosopher, let alone mentioned in the same breath as him. I would remind you that it is no blot on Hercules’s accomplishments that even he didn’t unload five shipping containers, nor is there any significance to the fact that, unlike John Henry, I live to work another day. My only desire is to return to my humble day-to-day life with no thought of recognition, not to live on in legend like Cincinnatus as some would have me do.

The highest ideal of Chinese thought is therefore a man who does not have to escape from human society and human life in order to preserve his original, happy nature. He is only a second-rate recluse, still slave to his environment, who has to escape from the cities and live away in the mountains in solitude. “The Great Recluse is the city recluse,” because he has sufficient mastery over himself not to be afraid of his surroundings. He is therefore the Great Monk (the kaoseng) who returns to human society and eats pork and drinks wine and mixes with women, without detriment to his own soul.

— Lin Yutang, The Importance of Living

For many users, informational exchange is only the incidental pretext to more important things like self-aggrandisement, covert attacks on imagined enemies, and consolidation of social power. In terms of psychological richness, then, Twitter-watching offers a panoply of fascinating characters to rival anything Dickens, Austen, or Eliot could come up with. There are aggressors advertising victimhood; grifters advertising blogs about anti-grifting; fragile souls being grandiose; cruel people preaching kindness. There is also an absolute tsunami of empty sentimentality over other people’s pets, partners, and kids — dead, nearly dead, or just plain cute. The Taoist-style challenge for the observer is simply to notice these things as they are, rather than to get caught up emotionally or wilfully in any of them. Try again. Fail again. Fail better. It’s also pointless judging anybody else for what, after all, are just human traits to which we are nearly all subject. And that’s hard too.

John Gray said, in reference to Richard Dawkins-style evangelical atheism, that it is a curious sort of “humanist” who disdains one of the most enduring and important activities in human life. That sort of “humanism” is more like idealism and its Janus-face misanthropy, the latter of which is revealed when the masses fail to live up to the standards you’ve set for them. As an armchair foolosopher, I’ve always been concerned with the corrosive effects of social media, but I also recognize the futility of wishing that human beings would renounce the petty pleasures of gossiping, boasting, bullying, and attention-seeking in favor of quiet contemplation. And so, like Yutang and Stock, I aim to simply notice the great human drama without getting caught up in it. Perhaps even now, the Henry James of the social media age is compiling notes for his masterpiece, only after which will people say, ah, so there was art to be found there after all.

November 15, 2022 By Damian in ohferfucksake No Comments

“Did you know Substack was founded by Nazis?” is a sentence that I have now heard spoken in earnest.

I wish there were enough veterans of World War 2 left to go around, Buzz Aldrin-style, pasting these ignorant kids right in the chops for trivializing the actual Nazis so casually.

If change is possible, carrying it out will be difficult, because we have adapted our lives to conform to social media’s pleasures and torments. It’s seemingly as hard to give up on social media as it was to give up smoking en masse, like Americans did in the 20th century. Quitting that habit took decades of regulatory intervention, public-relations campaigning, social shaming, and aesthetic shifts. At a cultural level, we didn’t stop smoking just because the habit was unpleasant or uncool or even because it might kill us. We did so slowly and over time, by forcing social life to suffocate the practice. That process must now begin in earnest for social media.

A mere decade ago, hack writers for hack publications were suggesting that anyone who wasn’t on social media was suspicious, creepy, possibly worth investigating. Ten years and 180 degrees later, and now they want to make even casual users into pariahs. Leaving aside the highly-dubious idea that any of these pathetic junkies are actually going to quit, it just goes to show that trends will come and go, but the crusading Puritan spirit that animates so many American enthusiasms remains as vibrant as ever. Busybodies, man. Forever pursuing and pawing us with their dirty institutions, trying to constrain us to join their desperate oddfellow societies. Swive ’em all. 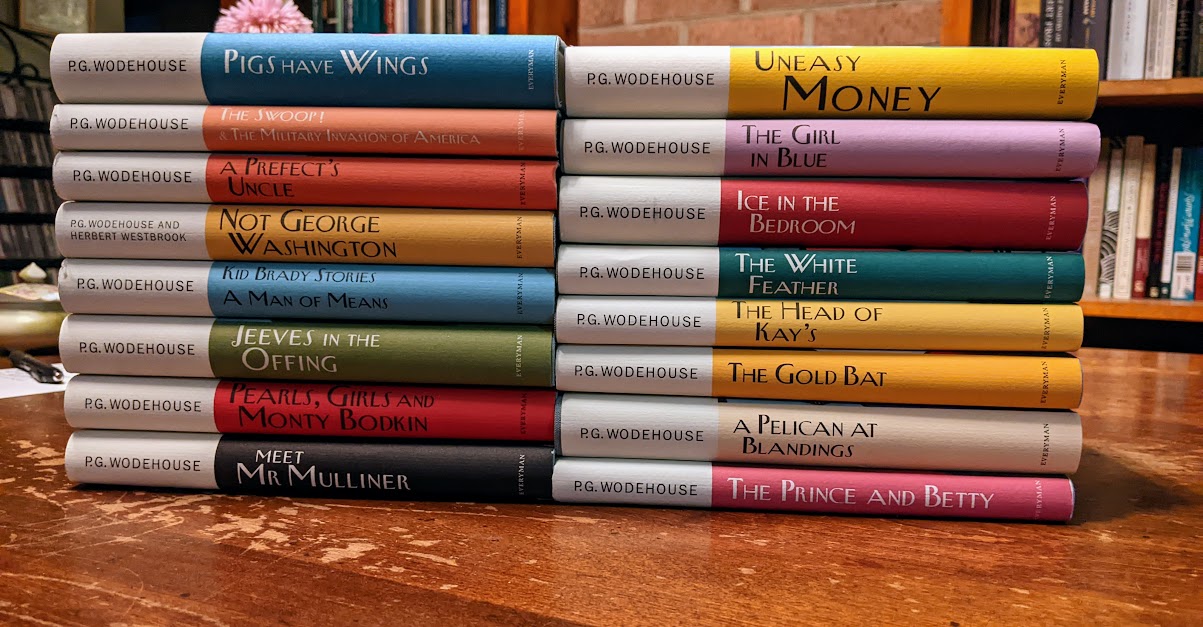 I’ve never been a collector of books. My reading is strictly utilitarian. As Jesus was glad to eat with tax collectors and sinners, so too am I happy to settle down with Goodwill discards and ex-library books. But I did let it be known that I wouldn’t mind having the attractive Everyman Wodehouse collection, so for my recent birthday, the Lady of the House started the ball rolling. 16 down, 83 to go. I also encouraged her to make a spreadsheet of all the titles for easy reference, so she’s just as happy as a pig in…Blandings Castle.