Apart from all that, it’s absolutely essential to alternate urban and country walks, without favouring one over the other. For while they share a common basis (free play of the imagination in recomposing impressions), their qualities are different: walking on pavements and park alleys involves a casual approach, giving access, via the diversity of humanity and of the behaviour of our fellows, to detailed small discoveries, enchanting to the mind; walking alone in the company of streams and trees is more likely to produce a dreamy state, very far removed from the stresses of systematic introspection, but by the same token, fertile: as if, gently distracted by the sight of flowers and skylines, the soul could forget itself for a while, and thus become aware of some facets of its own that ordinarily stay hidden.

— Fréderic Gros, A Philosophy of Walking

I agree. As much as I favor forests and mountains, I especially love walking through cities in the early morning. As it happens, we’ve been walking in all sorts of environments this week. Monday morning found us perched upon one of our favorite mountaintops in the Blue Ridge: 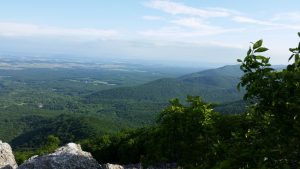 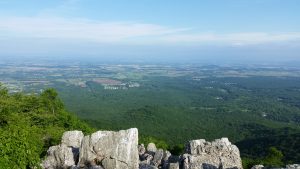 A little over a day later, our travels took us to Buffalo, where we took a lovely walk around Delaware Park and the nearby Japanese garden to stretch our legs after nine hours on the road: 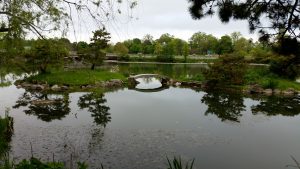 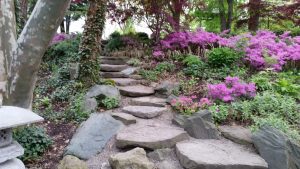 I was slightly surprised to see a monument to Mozart and a replica of Michelangelo’s David near the park, but, well, why not, I concluded. 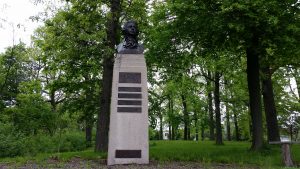 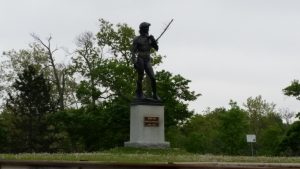 Today, we strolled around the beautiful Forest Lawn cemetery. There were almost too many picturesque scenes to choose from, but I liked this view of two partially-obscured maples near a stone bridge. 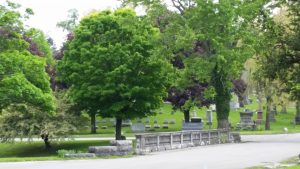 For a surreal split-second, I thought, “Wait, what? Verdi’s buried here?” No, just another musical monument, and why not. I love his music too. 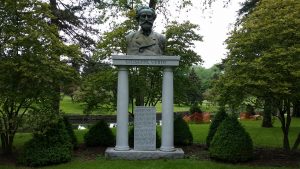 We did spend a little time on the pavement of downtown Buffalo, where we found a pub serving Impossible Burgers. The place we went for lunch today had the Beyond Burger, so we got to try both of the hot new meatless burgers in a twenty-four hour period. As Lincoln Steffens might have said, I have tasted the future, and it works. Granted, I’m not exactly a carnivorous connoisseur, but I really couldn’t tell the difference. The Impossible Burger seems to be getting the majority of the favorable press so far, but we thought the Beyond Burger looked a bit more like the real thing. Still, we liked them both, and it will be very interesting to see how the meat industry is affected by this.

Other than that, I doubt that a mall counts as urban walking, but we did walk around the giant Walden Galleria mall this evening. I know it’s traditionally an old folks thing, but I’ve actually come to enjoy walking through malls and doing a little people-watching. All in all, we probably covered more than ten miles. I don’t know if New Balance would like to offer me a sponsorship, but I’d be happy to testify that their M990GL4 shoe does very well at preventing fatigue and soreness.

What glorious weather, too. Cloudy and cool, thirty-five degrees cooler than back home. Perfect for walking.