You Can’t Trust Freedom When It’s Not in Your Hands, When Everybody’s Fightin’ for Their Promised Land

Kate: The thing is, as much as some Redditors may want to claim otherwise, Reddit is not The Internet. Reddit is a privately owned platform that can decide what sort of user-generated content will or will not be tolerated. Legally, Condé Nast (who owns Reddit) can do whatever they want to control what is posted on the site (which seems like not much, because pageviews, probably). The question that Shatner’s comments raise is whether or not they should.

…The other thing I wanted to bring up is why we are even talking about this in the first place. I mean, who cares whether or not Reddit is tolerant of this sort of stuff except for people who hang out on Reddit? Why is this even a story to begin with? Well, it’s a story because Reddit is an influential platform—influential enough that President Obama’s campaign staff thought it would behoove him to do an AMA. So the reason that this matters is because one of the most influential and highly-trafficked sites on the internet is also a site that hosts a lot of content that demeans and insults the majority of the US population.

Whitney: The problem I’ve always had with that argument—if we start censoring some of the things, what will stop us from censoring ALL of the things??—is that it essentially plays on a person’s fear of being silenced, not their sense of basic human decency. In short: this person is being censored for their beliefs. You don’t want to be censored for YOUR beliefs, do you?? Then you better defend with your life other Redditors’ right (which isn’t actually their right, as they’re posting to a privately owned website) to post incendiary, unnecessary, completely unproductive bile all day, because “free speech.”

In other words, the argument that selective censorship can only lead us down a path to fascism often does little more than to lull everyone else into complicity, and therefore functions as preemptive self-censorship. You are encouraged to hold your tongue when you see something upsetting, because maybe next time you’ll be the one whose speech is under the microscope. This is a problem, because some people need to be told to SHUT UP, particularly when their speech interferes with their audience’s basic human right—what should be a basic human right—not to be constantly inundated with violently racist, sexist, homophobic, pedophilic or otherwise ignorant bullshit every time they go online.

I tried to charitably interpret this discussion, to look for some nuance I perhaps hadn’t heard before in similar arguments, but it seems like the same old same old to me, now fortified with extra Social Justice Warrior buzzwords and butthurt. Yes, first amendment issues don’t apply to privately-owned spaces, but by the same token, if you don’t like what’s being said in one private forum, you’re free to go find one more to your liking, or create one yourself. Miltner’s comment is revealing: the problem isn’t the existence of such questionable content, which would be grudgingly tolerable if quarantined in some remote corner of the Internet, but the fact that large numbers of people on a popular site aren’t as bothered by it as she is. 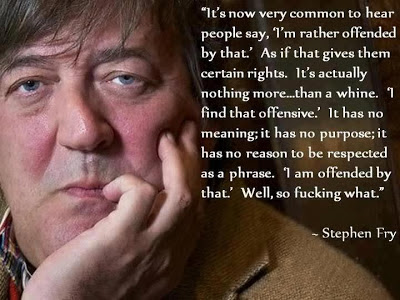 As Isaiah Berlin explained at length, political and social values, even the ones that are commonly agreed to be “positive,” are frequently in conflict. He justified his prioritizing of liberty as the paramount value by noting that its presence was the necessary precondition for even having the argument about where to draw the line, let alone the ability to correct the overreaching of ideological zealots. It may be unrealistic to refuse to act in the absence of total consensus, but one should also be extremely wary of those who are impatient to declare the discussion over and settled, especially when they make their case through such loaded language, dismissive snark and blatant appeals to emotion, as Philips does above.

« There Was No War but the Class War, I Was Ready to Set the World On Fire» Winter Heavens