A Brief Spark of Sweetness In an Aching World 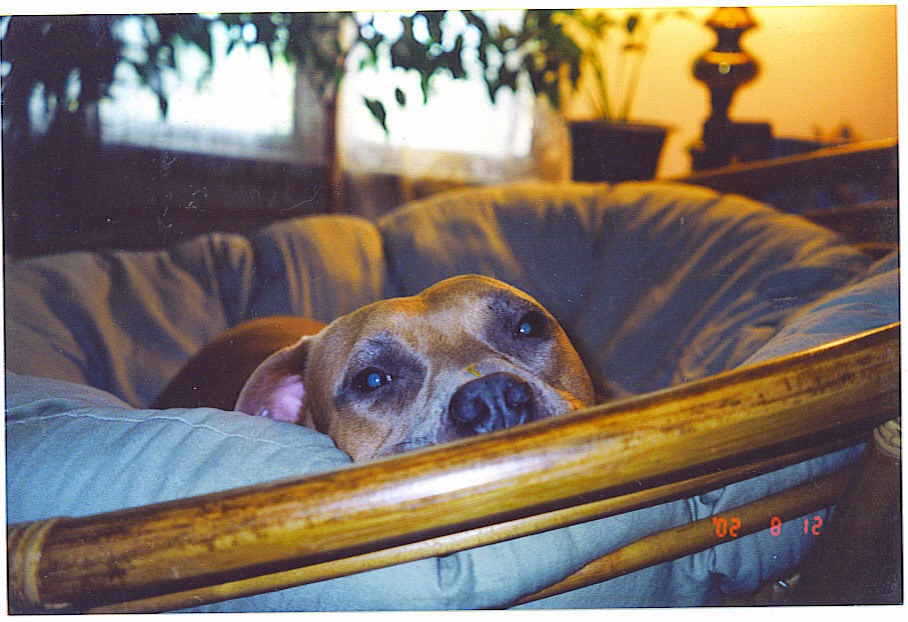 12/1999 — 7/24/14
There will be years and years, each small forgetting a betrayal, each small betrayal a comfort, each small comfort another death. There is no lesson here, no lesson. Narcissus sought himself reflected in the world and found only death. Plums will bloom until there are no more plums. I will join him diffused into the soil, our component atoms intermingled one day soon, a dog and a man who walked together for a time, a brief spark of sweetness in an aching world.
— Chris Clarke

The number of rescue dogs rises almost as inexorably as the number of pit bulls, and for good reason: The rescue movement came to its current prominence addressing the impossible plight of pit bulls—a plight that lent moral prestige to the cause of unwanted golden retrievers and Labradors. This is not to minimize the challenges faced by unwanted dogs of any breed; there are, after all, nearly four million American dogs in American shelters. But an unwanted pit bull is different from an unwanted golden retriever in that a market exists for unwanted golden retrievers and golden-retriever mixes; they are literally shipped from animal shelters in the south to animal shelters in the north because there are not enough of them. There are plenty of unwanted pit bulls. An unwanted pit bull generally stays unwanted, and the moral reward for rescuing one—okay, the moral self-congratulation—is doubled by the knowledge that it beat overwhelming odds just to stay alive.

…Every year, American shelters have to kill about 1.2 million dogs. But both pro- and anti-pit-bull organizations estimate that of these, anywhere from 800,000 to nearly 1 million are pit bulls. We kill anywhere from 2,000 to 3,000 pit bulls a day. They are rising simultaneously in popularity and disposability, becoming something truly American, a popular dog forever poised on the brink of extermination.

My heart is broken again for the sixth time in seven years. If there’s a perspective or a mental trick one can play on oneself to somehow make this more bearable, I haven’t found it yet. “Don’t cry because it’s over, smile because it happened.” Whether that came from Dr. Seuss or Gabriel García Márquez, I try my best to appreciate the wisdom of it. It happened, and it was good. It could so easily have been otherwise.

This one, like several of my others, came from a shelter too. A friend of ours ran the overflow for her county’s shelter. That is, she had dozens of kennels on her personal property where she would house dogs who had used up their time waiting to be adopted, but whom she felt deserved an extra chance. At that time, I was already beginning to feel the exhausting strain of being involved in pit bull rescue, but my ex convinced me to go out and see this ten month-old puppy her friend was raving about.

He was the absolute cutest, friendliest, most docile dog I’ve ever had. A true ambassador for the breed. It is utterly heartbreaking to think that a chance intervention saved him from being just one more puppy euthanized before he ever had a chance to discover how much he loved the taste of pizza, how good he was at singing along to the harmonica, how his terrier bloodline made him an expert mouse-catcher. It’s astonishing to think that such a perfect dog could sit in that shelter for two weeks without anyone wanting to take him home. The thought of thousands, or millions, more like him who weren’t and won’t be so lucky is unbearable. My mind just blanks out trying to contemplate it. Whenever I win the lottery that I don’t play, that’s what I’ll do with my money — give as many of them a chance to live out long, happy lives as possible.

« You’d Go Out — Bang! — Just Like a Candle!» Limit Your Imagination, Keep You Where They Must