That’s the whole trouble. You can’t ever find a place that’s nice and peaceful, because there isn’t any. You may think there is, but once you get there, when you’re not looking, somebody’ll sneak up and write “Fuck you” right under your nose. Try it sometime.

I spent a pleasant morning hiking up a small mountain to a steep overlook from a rocky outcropping. The fog was too thick to take any good pictures, but I didn’t mind. It was overcast and breezy, hinting at rain, just chilly enough to let you know that fall would be here soon. I only passed four other people along the way, so for most of the walk, there was nothing to listen to but the susurrus of the wind through the trees and the first leaves beginning their gravitational pilgrimage. After an hour, I got to the top and sat for a while to eat a banana and sip a thermos of coffee flavored with vanilla cha’i. The fog was thick enough to be vertiginous; if not for the rock underneath me, I could have just as easily imagined myself lost at sea.

So after sitting and meditating for a bit, I headed back down, only to see something etched on the rocks that I had missed on the way up: 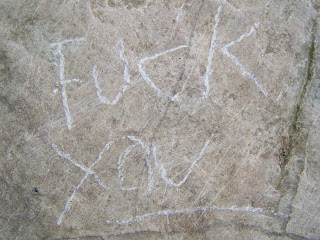 Alas, ol’ Holden was right. But it made me wonder: what kind of person makes the arduous trip up the mountain, surrounded by all that natural beauty, with enough hate in their heart to make that the crowning achievement of the journey? There were worse defacements, many with spraypaint, but this was the only one I saw that was so angry. Not an affirmation of their existence, but a rejection of yours. Not a vain plea for attention and validation from indifferent strangers and an uncaring universe, but a denial of everyone else’s. This was the distilled essence of our unknown author’s eloquence, the depths of his or her poetic soul revealed to us, perhaps even to be found millennia from now by future archaeologists studying the collapse of Western civilization. A textual middle finger of salutation offered to the world.

As I pondered Caulfield’s words, I was inspired to a similar vision of being a protector of innocence. I wanted to do my part to shield unsuspecting children from having an enjoyable day in the mountains sullied by profanity etched into the splendor of the forest. I wanted to help preserve this little enclave of peacefulness for those who came out here to get away from the madness of day-to-day life.

So when I saw a small group of twenty-somethings coming up the trail, talking loudly, texting away on their phones, I became suspicious. Maybe I’m guilty of profiling, but it seemed to me that here we had a perfect example of the kind of people most likely to declare their eternal love for each other with a Sharpie on a rock, or a carving in a tree. These were likely the kind of people who left the empty beer can, ziplock bag and mismatched pair of socks I had passed on the trail below. Could I take a chance that the forest would be defiled further, right under my nose?

Of course not. So I waited for them to get directly underneath me before pushing one of the larger rocks loose, down onto their heads. One of the guys was only dealt a glancing blow on the shoulder, though, so to my severe annoyance, I had to give chase for a while through the undergrowth before I caught up to him. Luckily, his shrieks of terror and labored breathing made it easy to find him in the fog. Unfortunately for him, I wasn’t about to lug his heavy carcass back to his companions, so he had to be buried separately. And to top if off, I got a really painful scratch on my calf! But at least I could rest easy, having done my duty as a vigilante park ranger.

It occurred to me as I was heading back to my car that I had apparently mixed my memories of Catcher in the Rye with Lord of the Flies, but please, let’s not quibble over the minutiae of classic literature.

« They Bloat the Present With the Undigested Past» The Circle Has Been Broken, It’s Always Been This Way