One More Unto the Breach, Dear Digby, Once More

You know, it’s one thing for people to dispute whether Israel’s incursion into Gaza is disproportionate. It seems obvious to me that it is, but people can argue that in good faith. However, I’m frankly gobsmacked by the cavalier attitude of some Israeli and American politicians, like Michael Bloomberg, who blithely assert that a disproportionate response is exactly the right thing to do:

Well then genocide and nuclear holocaust are logically on the menu too, eh?

Why am I not surprised. Once we became a nation whose leasers casually describe torture techniques as “no-brainers” why would anything be off limits? This is the natural snowball effect of a nation which no longer even tries to pay lip service to the idea of international law.

Again, Digby rehashes her belief in some sort of Garden of Eden myth, where BushCo. being more or less open about the fact that we torture people is the event that caused our fall from grace. She seems to think that the concept of “disproportionate” responses in warfare are directly descended from Abu Ghraib or something. I have a nagging feeling she’s forgetting something… 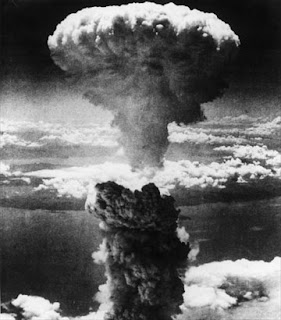 Her myopic obsession with the issue of torture and our national morality has really left me gobsmacked. She’s by no means stupid, yet…

All right, let’s put it like this. We occupy this land because our ancestors exterminated the original inhabitants in a manner that Hitler himself would approvingly cite as a model he hoped to follow, sometimes by deliberate proto-chemical warfare in the form of germ-laden blankets offered ostensibly in peace. For the first few hundred years of our existence here, we kept millions of humans as property, and only stopped after the most destructive war we’ve ever been in, one from which the ripples are still extending outward. We started our career as an imperialist power by brutalizing the Philippines and deliberately lying to gin up a war with Spain. We incinerated Dresden. WE FUCKING NUKED THE JAPANESE (TWICE!), as I’ve already mentioned. A large portion of the country maintained an apartheid regime that only ended a few decades ago. We fought a useless war that eventually extended to two other countries based entirely on lies and paranoia about enemies who desired to dominate the world the way we wanted to, dropping more bombs in the process than had been dropped in the entirety of World War 2, which still maim and kill people to this day. We turned Central America into an abattoir in the ’80s, we cynically supported the mujaheddin in Afghanistan, and we’ve been brutally, sadistically torturing Iraq for almost two decades now. Oh, and our “intelligence” agencies have been overthrowing democratically elected governments, smuggling drugs and instructing sadists from other countries in the most effective methods of torturing and terrorizing their own populations when we haven’t actively been doing it ourselves. And that’s just a thumbnail sketch!

And yet, despite all this evidence showing that Americans are only hairless chimpanzees just like everyone else in the world, equally as violent and depraved but perhaps even more certain of our own righteousness despite the fact, Digby seems to think that we absolutely drew the line at holding down an individual in a secret room somewhere and making them scream in agony. Does she honestly think pieces of paper like the Constitution are some sort of secular talismans that can keep some of the most gruesome aspects of human nature at bay, like the desire to brutally – disproportionately – revenge oneself upon the enemy, or the “other”? We can vaporize entire cities and drown jungles in jellied gasoline in order to murder people who have never done anything to us or our homeland without rending our star-spangled garments in agonized self-recrimination, but holding down a captured enemy and tormenting him with loud noise, electrical shocks, sleep deprivation, beatings and needles under his fingernails? Heaven forfend! What do you think we are, barbarians? I said GOOD DAY, sir!

I’m really not sure what’s more shocking – that she honestly believes something like the scenario I just suggested, or that she can rationalize away all the macro-level atrocities as long as there’s a convincing gesture towards basic humanity on the micro-level.

They were flown around the world, interrogated and tortured, and in the process, America not only created thousands of new terrorists while received no actionable intelligence, but lost its soul.

I’ve never laughed while throwing up in my mouth before. That was a unique experience. The amazing ever-replenishing reservoir of national soul and innocence. Oh, George, I can hear you laughing now…

I keep hearing that America lost its innocence on 9/11. I thought that happened when JFK was shot. Or was it Vietnam? Pearl Harbor? How many times can America lose its innocence? Maybe we keep finding it again. Doubtful. Because, actually, if you look at the record, you’ll find that America has had very little innocence from the beginning.