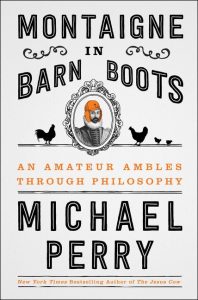 Every now and then, I go on Amazon and search for books about Montaigne. I’m not exactly sure why I do this.

What I mean is, reading about Montaigne is no substitute for just reading the man himself. Aside from a few minor points which may have gotten lost in translation over the centuries and require an explanatory footnote, the Essays themselves are pretty straightforward. No tour guide necessary. Eric Hoffer, the longshoreman philosopher, said he never had the urge to write until after reading Montaigne. He related a story of being snowbound in a mining camp with a copy of the Essays for company, where he read it three times and knew it almost by heart. When he returned to migratory work in the San Joaquin Valley, he quoted the book so often that his fellow workers would ask him, “What does Montaigne say?” to settle various arguments. One bunkmate borrowed the book for an hour and said upon returning it, “Anyone can write a book like this.”

Well — not exactly, but it’s easy to see how he (and many others) could get that impression. Montaigne is very approachable and conversational. But it’s not easy to write about your own thoughts and impressions without falling into “Dear Diary” self-absorption; the trick is in using those thoughts and impressions to make interesting connections with the wider world that strangers will find relevant enough to read and care about. And let’s not forget that a well-turned phrase isn’t something that most people can toss off effortlessly. For most of us, including Montaigne, it takes a lot of practice and a fair amount of revising and rewriting. As the popular meme might put it, “One does not simply step into Montaigne’s shoes.”

So what am I hoping to find with a book like Michael Perry’s Montaigne in Barn Boots: An Amateur Ambles Through Philosophy? Do I expect, mutatis mutandis, a modern version of the original? I don’t think so, and not just because there are some mighty trees which cast too wide of a shadow for anything else to grow in close proximity. Ben Schott, for example, has recently published an homage to P.G. Wodehouse, in which he puts Jeeves and Wooster through some new adventures. Now, as someone who would love to hear that some medium had started channeling a steady supply of new stories through the restless shade of Wodehouse, am I going to read Schott’s version? Not on your life. The slightest difference in character or dialogue would feel to me as the pea did to the princess. It’s unfair to expect someone to improve upon perfection, and it’s hubristic to try. Besides, what would it even mean to say that someone is “like” Montaigne? One of the most irritating low-wattage bulbs of comparative illumination I’ve ever seen flickers on the jacket of several of Theodore Dalrymple’s books, where it is claimed that he is “the Orwell of our time.” All I can think about when I see that is how many ways the two men are absolutely nothing alike, which I’m sure was not the intention. How would one transport the quiddity of a writer like Montaigne across five centuries and have it arrive in a recognizable condition?

Is it novelty, then? Am I hoping to learn something new that I didn’t already know? Possibly, but deep down, at least, I know better. Damon Linker once offered a suggestion why political conservatives are underrepresented in the humanities — he thought it was because the research model of the modern university incentivizes “progress” in knowledge, which is ill-suited for the study of classic writers and thinkers who can’t be improved upon. The only way to make Shakespeare, Montaigne, etc. “relevant” today is to study them in the context of our current ephemeral fixations — race, gender, oppression, and sundry other grievances. Likewise, it’s very doubtful there’s anything left to be excavated from the literature on Montaigne, just dust and bone fragments of interest only to narrow specialists. Philippe Desan recently published a new “mythbusting” biography of Montaigne which, I am reliably informed, was a dully-written academic hatchet job aiming to reduce its subject to an opportunistic hypocrite. If that’s what scholarship is typically producing, I’m not interested.

The Lady of the House read Perry’s book immediately after I did. As she comes from genuinely rural, cow-centric origins, she was skeptical at first, thinking that the whole concept seemed a bit too gimmicky, like a printed-page reality show designed by a New York publisher: “Hey, let’s take a 16th-century French nobleman and make him roommates with a modern-day Wisconsin roughneck! Imagine the wacky hijinks!” (Perry does relate one amusing anecdote of a former, yes, New York-based publicist who wanted to throw a book release party for him and his neighbors and asked where she might go about renting gingham tablecloths and genuine straw bales. “I guess she assumed I’d supply my own overalls and banjo,” he said.) There was one passage in particular early on in the book:

Among all the chickens randomly ravaging the slop on any given morning, there is always one who locates a prize hunk of glop, nabs it, then darts into the weeds, hoping to choke it down before the other chickens catch on. The tactic is rarely successful, as there are always two or three other birds in hot pursuit, trying to rip the morsel from the first chicken’s beak or snatch it should it fall to the ground. But now and then one lucky bird scores and makes a clean escape. And then, safely out of sight, the bird discovers the treasured goodie is too big to swallow. And so it is you will sometimes return to the pen an hour later to find the same chicken trying to gag down a knob of gristle thrice the caliber of its gullet. Unwilling to turn it loose, the bird stands there blinking in perplexity.

I am that chicken. I read the experts’ erudite, multi-layered, cross-referential deconstructions and am left blinking, uncertain how to proceed, but unwilling to give up, hoping if nothing else to absorb some mental nutrition via proximity and osmosis.

She thought this almost seemed to pander to the expectation of, say, the quintessential NPR listener who happened to be reading. Aw, isn’t that just so folksy! But as a fellow under-educated fowl — nobody here but us chickens! — I appreciated what he was saying here. I, too, have had to make up in graft what I lack in formal education. And to be fair, how else is he supposed to put it? Take the particular and make it universal. If his “particular” is a Midwestern farm, so be it. It only seems jarring because of the background assumption that people “like him” don’t read Montaigne, and why should that be? If Montaigne is surrendered to the academics, well, we’ve already seen how that will turn out.

The book is very colloquial and conversational; I breezed through it over two bedtime reading sessions. I wouldn’t say it was profound, but I still felt kindly disposed toward it. I winced a bit to see him approach the concept of intersectionality in his musings, but I had to admit that Montaigne himself would have probably been just as sanguine and interested in the topic were he to visit us (Perry even managed to find an impressively reasonable quotation from Roxane Gay, which must have taken no small amount of effort and open-mindedness). Thankfully, the book wasn’t overly weighed down by the trendy and topical. I suppose I just like the idea of sitting around having an informal discussion about Montaigne, even one conducted through the temporal and spatial distance of the written word. The aforementioned chicken image also made me realize that whenever I feel like I’ve truly understood something, it’s been through a skillful metaphor. In my own writing, the moments I’m proudest of are those when I’ve vividly — and accurately — said, “A is B,” or better yet, I suppose, for being more counterintuitive, “A is Z.” I’m not one for laboriously accumulating details; I generally feel like I get something when I can deftly compare it to something else. Perhaps I just tend to think more in pictures. Or maybe it’s the playful nature of metaphors that appeals to me, the inherent humor of comparing unlike things.

In fact, that’s probably the closest I’ll get to an answer to my original question. I don’t expect to find a modern clone of Montaigne, and I don’t expect to learn anything new about him. I just enjoy seeing other people kick around the ball that he put into play on the field to begin with. I like seeing other people inspired by his example to play with the instruments and techniques that he introduced. Some of the efforts may be decidedly amateur, but there are far worse ways to spend a few hours than thinking or conversing about Montaigne with others, even if only in spirit.

« I Used to Love Her, But I Had to Kill Her» The Terror of Existence